Gladders et al. have recently suggested that the star formation histories (SFHs) of individual galaxies are characterized by a log-normal function in time, implying a slow decline rather than rapid quenching. We test their conjecture on theoretical SFHs from the cosmological simulation Illustris and on observationally inferred SFHs. While the log-normal form necessarily ignores short-lived features such as starbursts, it fits the overall shape of the majority of SFHs very well. In particular, 85% of the cumulative SFHs are fitted to within a maximum error of 5% of the total stellar mass formed, and 99% to within 10%. The log-normal performs systematically better than the commonly used delayed-τ model, and is superseded only by functions with more than three free parameters. Poor fits are mostly found in galaxies that were rapidly quenched after becoming satellites. We explore the log-normal parameter space of normalization, peak time, and full width at half maximum, and find that the simulated and observed samples occupy similar regions, though Illustris predicts wider, later-forming SFHs on average. The ensemble of log-normal fits correctly reproduces complex metrics such as the evolution of Illustris galaxies across the star formation main sequence, but overpredicts their quenching timescales. SFHs in Illustris are a diverse population not determined by any one physical property of galaxies, but follow a tight relation, where {width} \propto {({peak}{time})}3/2. We show that such a relation can be explained qualitatively (though not quantitatively) by a close connection between the growth of dark matter halos and their galaxies. 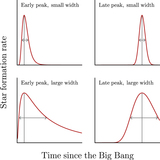