An Update on Monitoring Stellar Orbits in the Galactic Center

Using 25 years of data from uninterrupted monitoring of stellar orbits in the Galactic Center, we present an update of the main results from this unique data set: a measurement of mass and distance to Sgr A*. Our progress is not only due to the eight-year increase in time base, but also to the improved definition of the coordinate system. The star S2 continues to yield the best constraints on the mass of and distance to Sgr A* the statistical errors of 0.13× {10}6 {M}⊙ and 0.12 kpc have halved compared to the previous study. The S2 orbit fit is robust and does not need any prior information. Using coordinate system priors, the star S1 also yields tight constraints on mass and distance. For a combined orbit fit, we use 17 stars, which yields our current best estimates for mass and distance: M=4.28+/- 0.10{| }{stat.}+/- 0.21{| }{sys}× {10}6 {M}⊙ and {R}0=8.32+/- 0.07{| }{stat.}+/- 0.14{| }{sys} {kpc}. These numbers are in agreement with the recent determination of R 0 from the statistical cluster parallax. The positions of the mass, of the near-infrared flares from Sgr A*, and of the radio source Sgr A* agree to within 1 mas. In total, we have determined orbits for 40 stars so far, a sample which consists of 32 stars with randomly oriented orbits and a thermal eccentricity distribution, plus eight stars that we can explicitly show are members of the clockwise disk of young stars, and which have lower-eccentricity orbits. 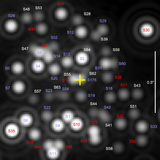