We study the spectral energy distribution (SED) of the radio continuum (RC) emission from the Key Insight in Nearby Galaxies Emitting in Radio (KINGFISHER) sample of nearby galaxies to understand the energetics and origin of this emission. Effelsberg multi-wavelength observations at 1.4, 4.8, 8.4, and 10.5 GHz combined with archive data allow us, for the first time, to determine the mid-RC (1-10 GHz, MRC) bolometric luminosities and further present calibration relations versus the monochromatic radio luminosities. The 1-10 GHz radio SED is fitted using a Bayesian Markov Chain Monte Carlo technique leading to measurements for the nonthermal spectral index ({S}ν ∼ {ν }-{α {nt}}) and the thermal fraction ({f}{th}) with mean values of {α }{nt}=0.97 +/- 0.16(0.79 +/- 0.15 for the total spectral index) and {f}{th} = (10 ± 9)% at 1.4 GHz. The MRC luminosity changes over ∼3 orders of magnitude in the sample, 4.3× {10}2 {L}⊙ < MRC < 3.9× {10}5 {L}⊙ . The thermal emission is responsible for ∼23% of the MRC on average. We also compare the extinction-corrected diagnostics of the star-formation rate (SFR) with the thermal and nonthermal radio tracers and derive the first star-formation calibration relations using the MRC radio luminosity. The nonthermal spectral index flattens with increasing SFR surface density, indicating the effect of the star-formation feedback on the cosmic-ray electron population in galaxies. Comparing the radio and IR SEDs, we find that the FIR-to-MRC ratio could decrease with SFR, due to the amplification of the magnetic fields in star-forming regions. This particularly implies a decrease in the ratio at high redshifts, where mostly luminous/star-forming galaxies are detected. 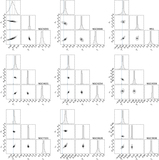