By exploiting two ACS/HST data sets separated by a temporal baseline of ∼7 years, we have determined the relative stellar proper motions (PMs; providing membership) and the absolute PM of the Galactic globular cluster M71. The absolute PM has been used to reconstruct the cluster orbit within a Galactic, three-component, axisymmetric potential. M71 turns out to be in a low-latitude disk-like orbit inside the Galactic disk, further supporting the scenario in which it lost a significant fraction of its initial mass. Since large differential reddening is known to affect this system, we took advantage of near-infrared, ground-based observations to re-determine the cluster center and density profile from direct star counts. The new structural parameters turn out to be significantly different from the ones quoted in the literature. In particular, M71 has a core and a half-mass radii almost 50% larger than previously thought. Finally, we estimate that the initial mass of M71 was likely one order of magnitude larger than its current value, thus helping to solve the discrepancy with the observed number of X-ray sources.

Based on observations collected with the NASA/ESA HST (GO10775, GO12932), obtained at the Space Telescope Science Institute, which is operated by AURA, Inc., under NASA contract NAS5-26555. 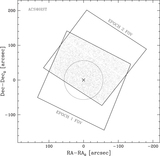