We discuss and test possible evolutionary connections between blue compact dwarf galaxies (BCDs) and other types of dwarf galaxies. BCDs provide ideal laboratories to study intense star formation episodes in low-mass dwarf galaxies, and have sometimes been considered a short-lived evolutionary stage between types of dwarf galaxies. To test these connections, we consider a sample of BCDs as well as a comparison sample of nearby galaxies from the Local Volume Legacy (LVL) survey for context. We fit the multi-wavelength spectral energy distributions (SED, far-ultra-violet to far-infrared) of each galaxy with a grid of theoretical models to determine their stellar masses and star formation properties. We compare our results for BCDs with the LVL galaxies to put BCDs in the context of normal galaxy evolution. The SED fits demonstrate that the star formation events currently underway in BCDs are at the extreme of the continuum of normal dwarf galaxies, both in terms of the relative mass involved and in the relative increase over previous star formation rates. Today’s BCDs are distinctive objects in a state of extreme star formation that is rapidly transforming them. This study also suggests ways to identify former BCDs whose star formation episodes have since faded. 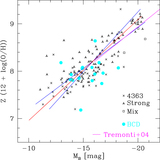