Coronal disturbances associated with solar flares, such as Hα Moreton waves, X-ray waves, and extreme ultraviolet (EUV) coronal waves, are discussed herein in relation to magnetohydrodynamic fast-mode waves or shocks in the corona. To understand the mechanism of coronal disturbances, full-disk solar observations with high spatial and temporal resolution over multiple wavelengths are of crucial importance. We observed a filament eruption, whose shape is like a “dandelion,” associated with the M1.6 flare that occurred on 2011 February 16 in Hα images taken by the Flare Monitoring Telescope at Ica University, Peru. We derive the three-dimensional velocity field of the erupting filament. We also identify winking filaments that are located far from the flare site in the Hα images, whereas no Moreton wave is observed. By comparing the temporal evolution of the winking filaments with those of the coronal wave seen in the EUV images data taken by the Atmospheric Imaging Assembly on board the Solar Dynamics Observatory and by the Extreme Ultraviolet Imager on board the Solar Terrestrial Relations Observatory-Ahead, we confirm that the winking filaments were activated by the EUV coronal wave. 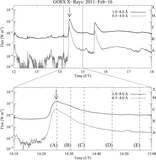