The Highly Ionized Circumgalactic Medium is Kinematically Uniform around Galaxies

The circumgalactic medium (CGM) traced by O VI λ λ 1031,1037 doublet absorption has been found to concentrate along the projected major and minor axes of the host galaxies. This suggests that O VI traces accreting and outflowing gas, respectively, which are key components of the baryon cycle of galaxies. We investigate this further by examining the kinematics of 29 O VI absorbers associated with galaxies at 0.13< {z}{gal}< 0.66 as a function of galaxy color, inclination, and azimuthal angle. Each galaxy was imaged with the Hubble Space Telescope (HST), and the absorption was detected in COS/HST spectra of nearby (D< 200 kpc) background quasars. We use the pixel-velocity two-point correlation function to characterize the velocity spread of the absorbers, which is a method used previously for a sample of Mg II absorber-galaxy pairs. The absorption velocity spread for O VI is more extended than Mg II, which suggests that the two ions trace differing components of the CGM. Again, in contrast to Mg II, the O VI absorption velocity spreads are similar regardless of galaxy color, inclination, and azimuthal angle. This indicates that the kinematics of the high-ionization gas is not strongly influenced by the current star formation activity in the galaxy. The kinematic homogeneity of O VI absorption and its tendency to be observed mainly along the projected galaxy major and minor axes is likely due to varying ionization conditions and gas densities about the galaxy. Gas in intermediate azimuthal angles may be ionized out of the O VI phase, possibly resulting in an azimuthal angle dependence of the distribution of gas in higher ionization states. 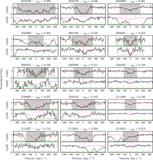