Constraints on the Obliquities of Kepler Planet-hosting Stars

Stars with hot Jupiters have obliquities ranging from 0° to 180°, but relatively little is known about the obliquities of stars with smaller planets. Using data from the California-Kepler Survey, we investigate the obliquities of stars with planets spanning a wide range of sizes, most of which are smaller than Neptune. First, we identify 156 planet hosts for which measurements of the projected rotation velocity (v sin i) and rotation period are both available. By combining estimates of v and v sin i, we find nearly all the stars to be compatible with high inclination, and hence, low obliquity (≲20°). Second, we focus on a sample of 159 hot stars (Teff > 6000 K) for which v sin i is available but not necessarily the rotation period. We find six stars for which v sin i is anomalously low, an indicator of high obliquity. Half of these have hot Jupiters, even though only 3% of the stars that were searched have hot Jupiters. We also compare the v sin i distribution of the hot stars with planets to that of 83 control stars selected without prior knowledge of planets. The mean v sin i of the control stars is lower than that of the planet hosts by a factor of approximately π/4, as one would expect if the planet hosts have low obliquities. All these findings suggest that the Kepler planet-hosting stars generally have low obliquities, with the exception of hot stars with hot Jupiters. 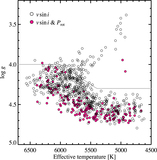