Transit photometry of the M8V dwarf star TRAPPIST-1 (2MASS J23062928-0502285) has revealed the presence of at least seven planets with masses and radii similar to that of Earth, orbiting at distances that might allow liquid water to be present on their surfaces. We have been following TRAPPIST-1 since 2011 with the CAPSCam astrometric camera on the 2.5 m du Pont telescope at the Las Campanas Observatory in Chile. In 2016, we noted that TRAPPIST-1 lies slightly farther away than previously thought, at 12.49 pc, rather than 12.1 pc. Here, we examine 15 epochs of CAPSCam observations of TRAPPIST-1, spanning the five years from 2011 to 2016, and obtain a revised trigonometric distance of 12.56 ± 0.12 pc. The astrometric data analysis pipeline shows no evidence for a long-period astrometric wobble of TRAPPIST-1. After proper motion and parallax are removed, residuals at the level of ±1.3 mas remain. The amplitude of these residuals constrains the masses of any long-period gas giant planets in the TRAPPIST-1 system: no planet more massive than ∼4.6 M Jup orbits with a 1 year period, and no planet more massive than ∼1.6 M Jup orbits with a 5 year period. Further refinement of the CAPSCam data analysis pipeline, combined with continued CAPSCam observations, should either detect any long-period planets, or put an even tighter constraint on these mass upper limits. 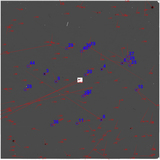