We report parallaxes and proper motions from the Hawaii Infrared Parallax Program for eight nearby M dwarf stars with transiting exoplanets discovered by Kepler. We combine our directly measured distances with mass-luminosity and radius-luminosity relationships to significantly improve constraints on the host stars’ properties. Our astrometry enables the identification of wide stellar companions to the planet hosts. Within our limited sample, all the multi-transiting planet hosts (three of three) appear to be single stars, while nearly all (four of five) of the systems with a single detected planet have wide stellar companions. By applying strict priors on average stellar density from our updated radius and mass in our transit fitting analysis, we measure the eccentricity probability distributions for each transiting planet. Planets in single-star systems tend to have smaller eccentricities than those in binaries, although this difference is not significant in our small sample. In the case of Kepler-42bcd, where the eccentricities are known to be ≃0, we demonstrate that such systems can serve as powerful tests of M dwarf evolutionary models by working in {L}\star {--}{ρ }\star space. The transit-fit density for Kepler-42bcd is inconsistent with model predictions at 2.1σ (22%), but matches more empirical estimates at 0.2σ (2%), consistent with earlier results showing model radii of M dwarfs are underinflated. Gaia will provide high-precision parallaxes for the entire Kepler M dwarf sample, and the Transiting Exoplanet Survey Satellite will identify more planets transiting nearby, late-type stars, enabling significant improvements in our understanding of the eccentricity distribution of small planets and the parameters of late-type dwarfs. 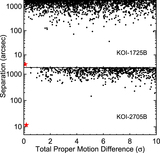