We report a detailed characterization of the Kepler-19 system. This star was previously known to host a transiting planet with a period of 9.29 days, a radius of 2.2 R ⊕, and an upper limit on the mass of 20 M ⊕. The presence of a second, non-transiting planet was inferred from the transit time variations (TTVs) of Kepler-19b over eight quarters of Kepler photometry, although neither the mass nor period could be determined. By combining new TTVs measurements from all the Kepler quarters and 91 high-precision radial velocities obtained with the HARPS-N spectrograph, using dynamical simulations we obtained a mass of 8.4 ± 1.6 M ⊕ for Kepler-19b. From the same data, assuming system coplanarity, we determined an orbital period of 28.7 days and a mass of 13.1 ± 2.7 M ⊕ for Kepler-19c and discovered a Neptune-like planet with a mass of 20.3 ± 3.4 M ⊕ on a 63-day orbit. By comparing dynamical simulations with non-interacting Keplerian orbits, we concluded that neglecting interactions between planets may lead to systematic errors that can hamper the precision in the orbital parameters when the data set spans several years. With a density of 4.32 ± 0.87 g cm-3 (0.78 ± 0.16 ρ ⊕) Kepler-19b belongs to the group of planets with a rocky core and a significant fraction of volatiles, in opposition to low-density planets characterized only by transit time variations and an increasing number of rocky planets with Earth-like density. Kepler-19 joins the small number of systems that reconcile transit timing variation and radial velocity measurements. 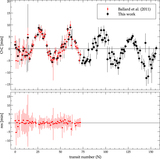