We report on the H-band spectral variability of classical Be stars observed over the course of the Apache Point Galactic Evolution Experiment (APOGEE), one of four subsurveys comprising SDSS-III. As described in the first paper of this series, the APOGEE B-type emission-line (ABE) star sample was culled from the large number of blue stars observed as telluric standards during APOGEE observations. In this paper, we explore the multi-epoch ABE sample, consisting of 1100 spectra for 213 stars. These “snapshots” of the circumstellar disk activity have revealed a wealth of temporal variability including, but not limited to, gradual disappearance of the line emission and vice versa over both short and long timescales. Other forms of variability include variation in emission strength, emission peak intensity ratios, and emission peak separations. We also analyze radial velocities (RVs) of the emission lines for a subsample of 162 stars with sufficiently strong features, and we discuss on a case-by-case basis whether the RV variability exhibited by some stars is caused by binary motion versus dynamical processes in the circumstellar disks. Ten systems are identified as convincing candidates for binary Be stars with as of yet undetected companions. 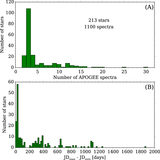