HD 141569 A is a pre-main sequence B9.5 Ve star surrounded by a prominent and complex circumstellar disk, likely still in a transition stage from protoplanetary to debris disk phase. Here, we present a new image of the third inner disk component of HD 141569 A made in the L‧ band (3.8 μm) during the commissioning of the vector vortex coronagraph that has recently been installed in the near-infrared imager and spectrograph NIRC2 behind the W.M. Keck Observatory Keck II adaptive optics system. We used reference point-spread function subtraction, which reveals the innermost disk component from the inner working distance of ≃23 au and up to ≃70 au. The spatial scale of our detection roughly corresponds to the optical and near-infrared scattered light, thermal Q, N, and 8.6 μm PAH emission reported earlier. We also see an outward progression in dust location from the L‧ band to the H band (Very Large Telescope/SPHERE image) to the visible (Hubble Space Telescope (HST)/STIS image), which is likely indicative of dust blowout. The warm disk component is nested deep inside the two outer belts imaged by HST-NICMOS in 1999 (at 406 and 245 au, respectively). We fit our new L‧-band image and spectral energy distribution of HD 141569 A with the radiative transfer code MCFOST. Our best-fit models favor pure olivine grains and are consistent with the composition of the outer belts. While our image shows a putative very faint point-like clump or source embedded in the inner disk, we did not detect any true companion within the gap between the inner disk and the first outer ring, at a sensitivity of a few Jupiter masses. 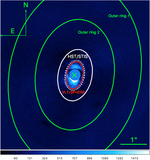