The Fornax Deep Survey with VST. III. Low surface brightness dwarfs and ultra diffuse galaxies in the center of the Fornax cluster

Context. Studies of low surface brightness (LSB) galaxies in nearby clusters have revealed a sub-population of extremely diffuse galaxies with central surface brightness of μ0,g' > 24 mag arcsec-2, total luminosity Mg' fainter than -16 mag and effective radius between 1.5 kpc <Re < 10 kpc. The origin of these ultra diffuse galaxies (UDGs) is still unclear, although several theories have been suggested. As the UDGs overlap with the dwarf-sized galaxies in their luminosities, it is important to compare their properties in the same environment. If a continuum is found between the properties of UDGs and the rest of the LSB population, it would be consistent with the idea that they have a common origin.
Aims: Our aim is to exploit the deep g', r' and i'-band images of the Fornax Deep Survey (FDS), in order to identify LSB galaxies in an area of 4 deg2 in the center of the Fornax cluster. The identified galaxies are divided into UDGs and dwarf-sized LSB galaxies, and their properties are compared.
Methods: We identified visually all extended structures having r'-band central surface brightness of μ0,r' > 23 mag arcsec-2. We classified the objects based on their appearance into galaxies and tidal structures, and perform 2D Sérsic model fitting with GALFIT to measure the properties of those classified as galaxies. We analyzed their radial distribution and orientations with respect of the cluster center, and with respect to the other galaxies in our sample. We also studied their colors and compare the LSB galaxies in Fornax with those in other environments.
Results: Our final sample complete in the parameter space of the previously known UDGs, consists of 205 galaxies of which 196 are LSB dwarfs (with Re < 1.5 kpc) and nine are UDGs (Re > 1.5 kpc). We show that the UDGs have (1) g'-r' colors similar to those of LSB dwarfs of the same luminosity; (2) the largest UDGs (Re > 3 kpc) in our sample appear different from the other LSB galaxies, in that they are significantly more elongated and extended; whereas (3) the smaller UDGs differ from the LSB dwarfs only by having slightly larger effective radii; (4) we do not find clear differences between the structural parameters of the UDGs in our sample and those of UDGs in other galaxy environments; (5) we find that the dwarf LSB galaxies in our sample are less concentrated in the cluster center than the galaxies with higher surface brightness, and that their number density drops within 180 kpc from the cluster center. We also compare the LSB dwarfs in Fornax with the LSB dwarfs in the Centaurus group, where data of similar quality to ours is available. (6) We find the smallest LSB dwarfs to have similar colors, sizes and Sérsic profiles regardless of their environment. However, in the Centaurus group the colors become bluer with increasing galaxy magnitudes, an effect which is probably due to smaller mass and hence weaker environmental influence of the Centaurus group.
Conclusions: Our findings are consistent with the small UDGs forming the tail of a continuous distribution of less extended LSB galaxies. However, the elongated and distorted shapes of the large UDGs could imply that they are tidally disturbed galaxies. Due to limitations of the automatic detection methods and uncertainty in the classification the objects, it is yet unclear what is the total contribution of the tidally disrupted galaxies in the UDG population. 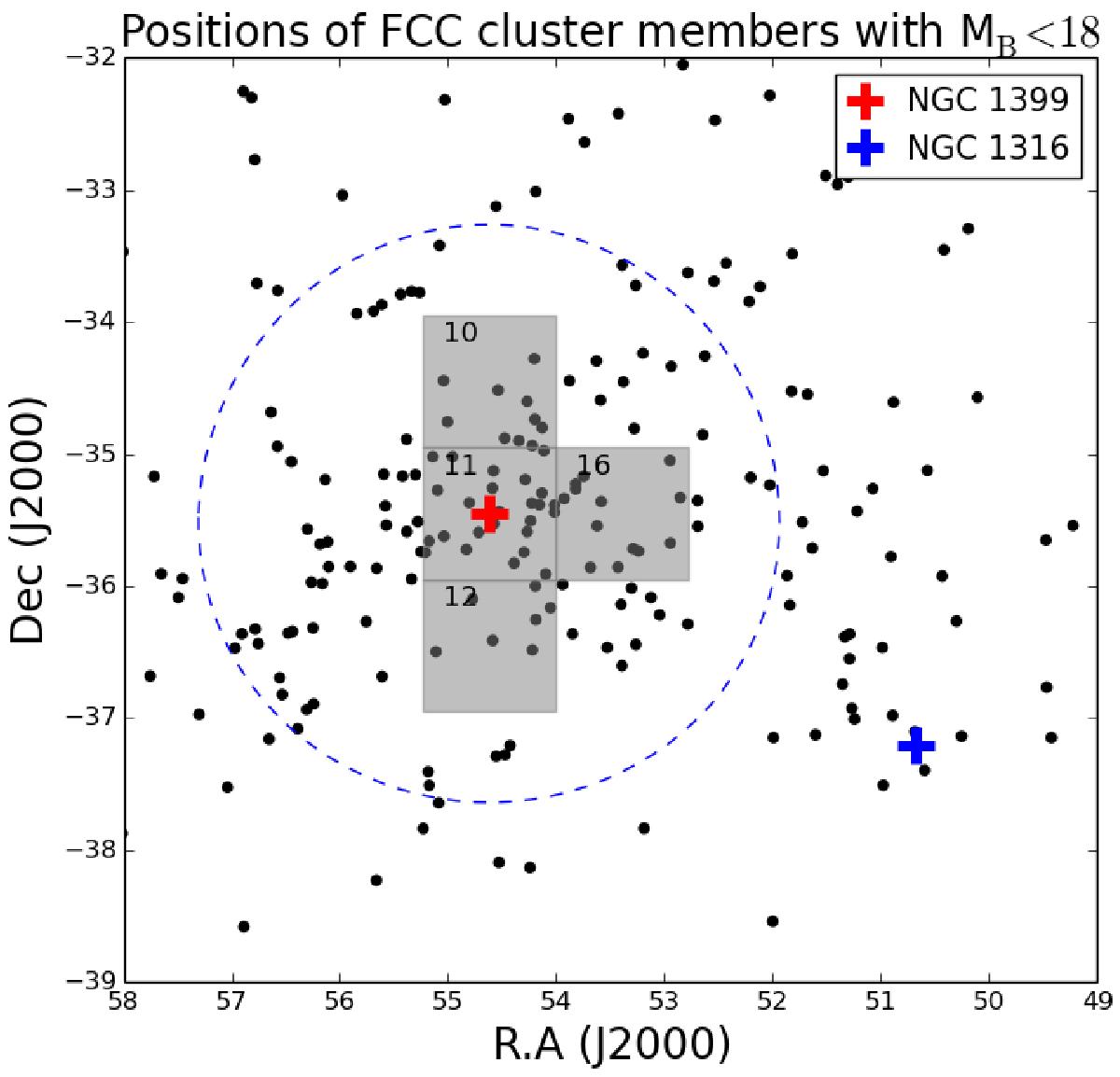