Cool and hot emission in a recurring active region jet


Aims: We present a thorough investigation of the cool and hot temperature components in four recurring active region jets observed on July 10, 2015 using the Atmospheric Imaging Assembly (AIA), X-ray Telescope (XRT), and Interface Region Imaging Spectrograph (IRIS) instruments.
Methods: A differential emission measure (DEM) analysis was performed on areas in the jet spire and footpoint regions by combining the IRIS spectra and the AIA observations. This procedure better constrains the low temperature DEM values by adding IRIS spectral lines. Plasma parameters, such as Doppler velocities, electron densities, nonthermal velocities and a filling factor were also derived from the IRIS spectra.
Results: In the DEM analysis, significant cool emission was found in the spire and the footpoint regions. The hot emission was peaked at log T [K] = 5.6-5.9 and 6.5 respectively. The DEM curves show the presence of hot plasma (T = 3 MK) in the footpoint region. We confirmed this result by estimating the Fe XVIII emission from the AIA 94 Å channel which was formed at an effective temperature of log T [K] = 6.5. The average XRT temperatures were also found to be in agreement with log T [K] = 6.5. The emission measure (EM) was found to be three orders of magnitude higher in the AIA-IRIS DEM compared with that obtained using only AIA. The O IV (1399/1401 Å) electron densities were found to be 2.0×1010 cm-3 in the spire and 7.6 × 1010 cm-3 in the footpoint. Different threads along the spire show different plane-of-sky velocities both in the lower corona and transition region. Doppler velocities of 32 km s-1 (blueshifted) and 13 km s-1 (redshifted) were obtained in the spire and footpoint, respectively from the Si IV 1402.77 Å spectral line. Nonthermal velocities of 69 and 53 km s-1 were recorded in the spire and footpoint region, respectively. We obtained a filling factor of 0.1 in the spire at log T [K] = 5.
Conclusions: The recurrent jet observations confirmed the presence of significant cool emission co-spatial with the coronal emission.

The movie attached to Fig. 3 is available at http://www.aanda.org 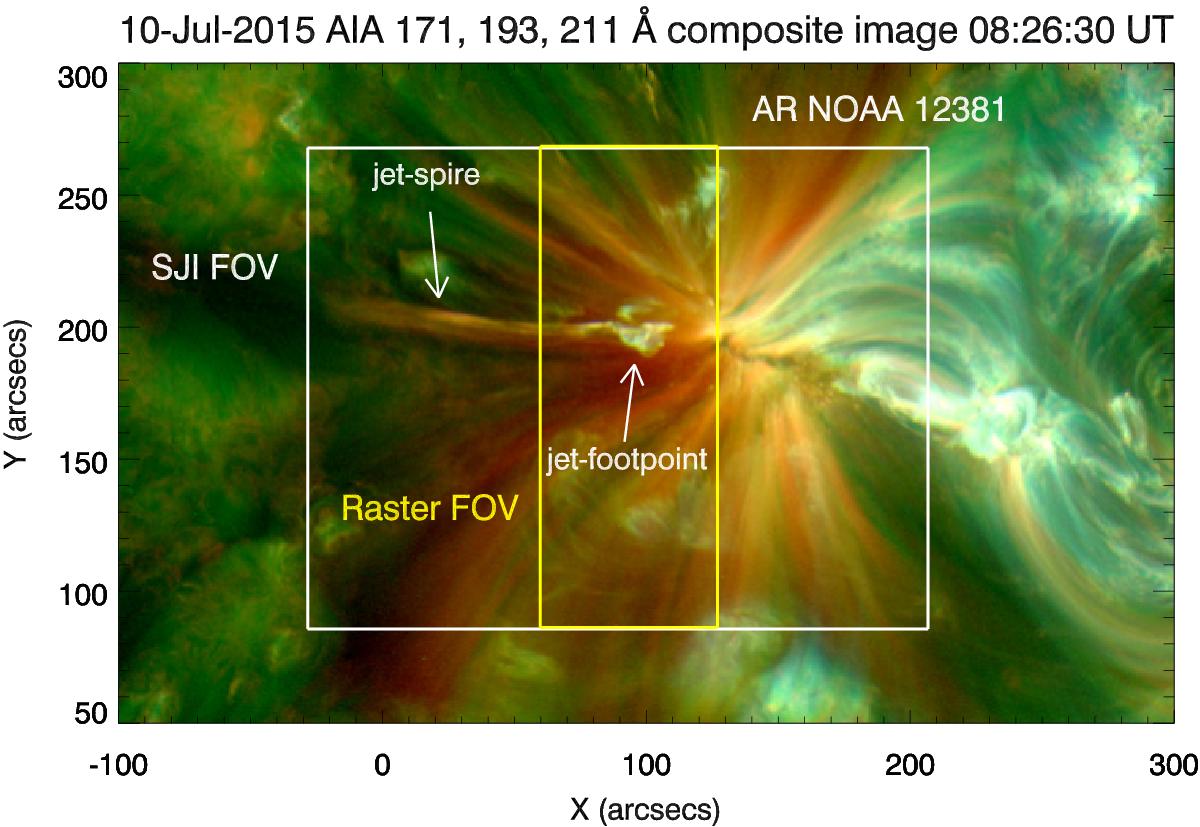