The formation of small-scale umbral brightenings in sunspot atmospheres

Context. Sunspot atmospheres have been shown to be highly inhomogeneous hosting both quasi-stable and transient features, such as small-scale umbral brightenings (previously named "umbral micro-jets") and dark fibril-like events.
Aims: We seek to understand the morphological properties and formation mechanisms of small-scale umbral brightenings (analogous to umbral micro-jets). In addition, we aim to understand whether links between these events and short dynamic fibrils, umbral flashes, and umbral dots can be established.
Methods: A Swedish 1 m Solar Telescope (SST) filtergram time-series sampling the Ca II H line and a CRisp Imaging Spectro-Polarimeter (SST/CRISP) full-Stokes 15-point Ca II 8542 Å line scan dataset were used. The spatial resolutions of these datasets are close to 0.1'' and 0.18'' with cadences of 1.4 s and 29 s, respectively. These data allowed us to construct light-curves, plot line profiles, and to perform a weak-field approximation in order to infer the magnetic field strength.
Results: The average lifetime and lengths of the 54 small-scale brightenings identified in the sunspot umbra are found to be 44.2 s (σ = 20 s) and 0.56'' (σ = 0.14''), respectively. The spatial positioning and morphological evolution of these events in Ca II H filtergrams was investigated finding no evidence of parabolic or ballistic profiles nor a preference for co-spatial formation with umbral flashes. Line scans in Ca II 8542 Å and the presence of Stokes V profile reversals provided evidence that these events could form in a similar manner to umbral flashes in the chromosphere (I.e. through the formation of shocks either due to the steepening of localised wavefronts or due to the impact of returning material from short dynamic fibrils, a scenario we find evidence for). The application of the weak-field approximation indicated that changes in the line-of-sight magnetic field were not responsible for the modifications to the line profile and suggested that thermodynamic effects are, in fact, the actual cause of the increased emission. Finally, a sub-set of small-scale brightenings were observed to form at the foot-points of short dynamic fibrils.
Conclusions: The small-scale umbral brightenings studied here do not appear to be jet-like in nature. Instead they appear to be evidence of shock formation in the lower solar atmosphere. We found no correlation between the spatial locations where these events were observed and the occurrence of umbral dots and umbral flashes. These events have lifetimes and spectral signatures comparable to umbral flashes and are located at the footpoints of short dynamic fibrils, during or at the end of the red-shifted stage. It is possible that these features form due to the shocking of fibrilar material in the lower atmosphere upon its return under gravity. 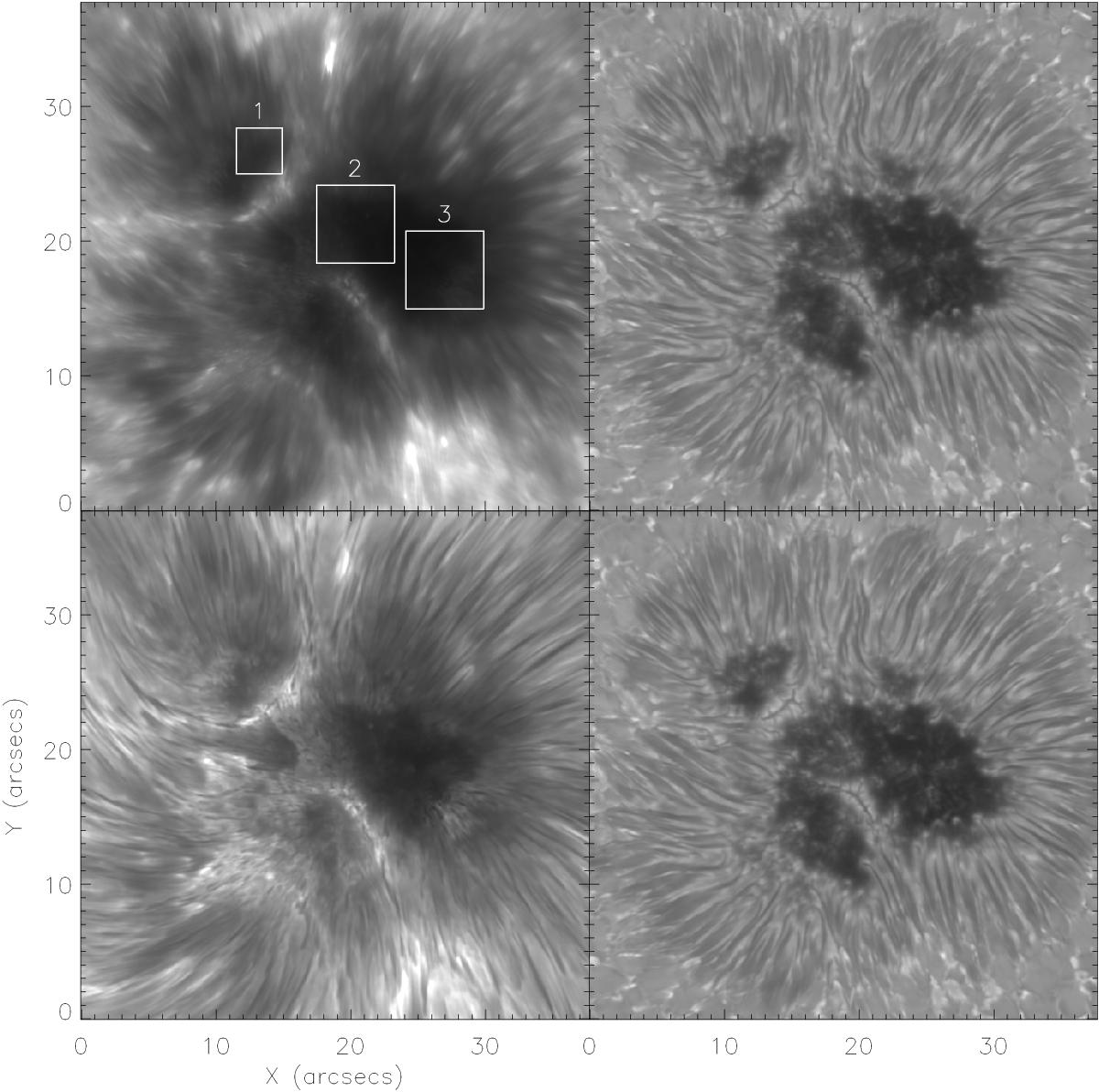