Thermal and energetic processing of astrophysical ice analogues rich in SO2

Context. Sulfur is an abundant element in the cosmos and it is thus an important contributor to astrochemistry in the interstellar medium and in the solar system. Astronomical observations of the gas and of the solid phases in the dense interstellar/circumstellar regions have evidenced that sulfur is underabundant. The hypothesis to explain such a circumstance is that it is incorporated in some species in the solid phase (I.e. as frozen gases and/or refractory solids) and/or in the gas phase, which for different reasons have not been observed so far.
Aims: Here we wish to give a contribution to the field by studying the chemistry induced by thermal and energetic processing of frozen mixtures of sulfur dioxide (one of the most abundant sulfur-bearing molecules observed so far) and water.
Methods: We present the results of a series of laboratory experiments concerning thermal processing of different H2O:SO2 mixtures and ion bombardment (30 keV He+) of the same mixtures. We used in situ Fourier transform infrared (FTIR) spectroscopy to investigate the induced effects.
Results: The results indicate that ionic species such as HSO, HSO, and S2O are easily produced. Energetic processing also produces SO3 polymers and a sulfurous refractory residue.
Conclusions: The produced ionic species exhibit spectral features in a region that, in astronomical spectra of dense molecular clouds, is dominated by strong silicate absorption. However, such a dominant feature is associated with some spectral features, some of which have not yet been identified. We suggest adding the sulfur-bearing ionic species to the list of candidates to help explain some of those features. In addition, we suggest that once expelled in the gas phase by sublimation, due to the temperature increase, and/or by non-thermal erosion those species would constitute a class of molecular ions not detected so far. We also suggest that molecular sulfur-bearing ions could be present on the surfaces and/or in the atmospheres of several objects in the solar system, for example icy satellites of the giant planets and comets. 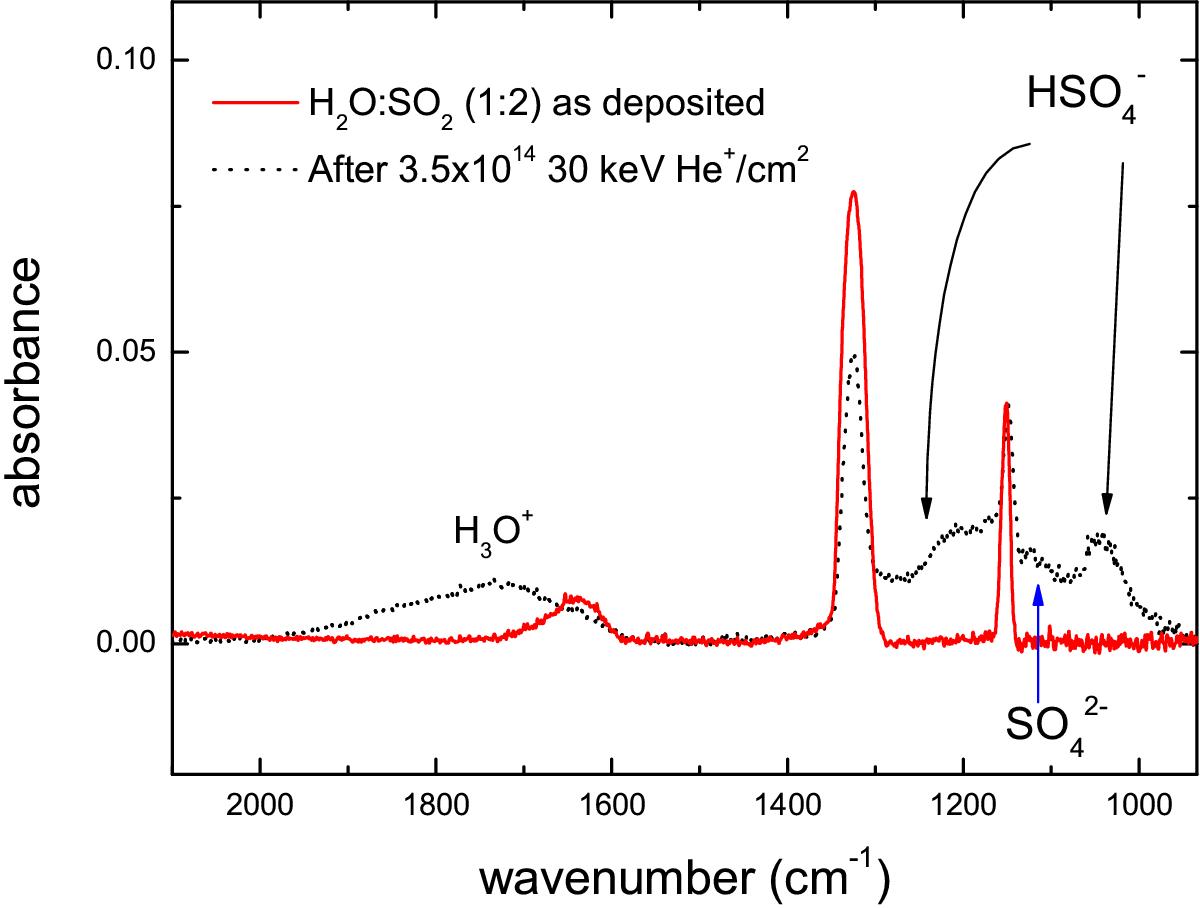