Context. We present the results of a seven-year-long radial velocity survey of a sample of 88 main-sequence and evolved stars to reveal signatures of Jupiter-mass planets in the solar-age and solar-metallicity open cluster M 67.
Aims: We aim at studying the frequency of giant planets in this cluster with respect to the field stars. In addition, our sample is also ideal to perform a long-term study to compare the chemical composition of stars with and without giant planets in detail.
Methods: We analyzed precise radial velocity (RV) measurements obtained with the HARPS spectrograph at the European Southern Observatory (La Silla), the SOPHIE spectrograph at the Observatoire de Haute-Provence (France), the HRS spectrograph at the Hobby Eberly Telescope (Texas), and the HARPS-N spectrograph at the Telescopio Nazionale Galileo (La Palma). Additional RV data come from the CORALIE spectrograph at the Euler Swiss Telescope (La Silla). We conducted Monte Carlo simulations to estimate the occurrence rate of giant planets in our radial velocity survey. We considered orbital periods between 1.0 day and 1000 days and planet masses between 0.2 MJ and 10.0 MJ. We used a measure of the observational detection efficiency to determine the frequency of planets for each star.
Results: All the planets previously announced in this RV campaign with their properties are summarized here: 3 hot Jupiters around the main-sequence stars YBP1194, YBP1514, and YBP401, and 1 giant planet around the evolved star S364. Two additional planet candidates around the stars YBP778 and S978 are also analyzed in the present work. We discuss stars that exhibit large RV variability or trends individually. For 2 additional stars, long-term trends are compatible with new binary candidates or substellar objects, which increases the total number of binary candidates detected in our campaign to 14. Based on the Doppler-detected planets discovered in this survey, we find an occurrence of giant planets of 18.0+12.0-8.0% in the selected period-mass range. This frequency is slightly higher but consistent within the errors with the estimate for the field stars, which leads to the general conclusion that open cluster and field statistics agree. However, we find that the rate of hot Jupiters in the cluster ( 5.7+5.5-3.0%) is substantially higher than in the field.

Based on observations collected at the ESO 3.6m telescope (La Silla), at the 1.93 m telescope of the Observatoire de Haute-Provence (OHP, France), at the Hobby Eberly Telescope (HET, Texas), at the Telescopio Nazionale Galileo (TNG, La Palma) and at the Euler Swiss Telescope (La Silla).Individual RV measurements are available at the CDS via anonymous ftp to http://cdsarc.u-strasbg.fr (http://130.79.128.5) or via http://cdsarc.u-strasbg.fr/viz-bin/qcat?J/A+A/603/A85 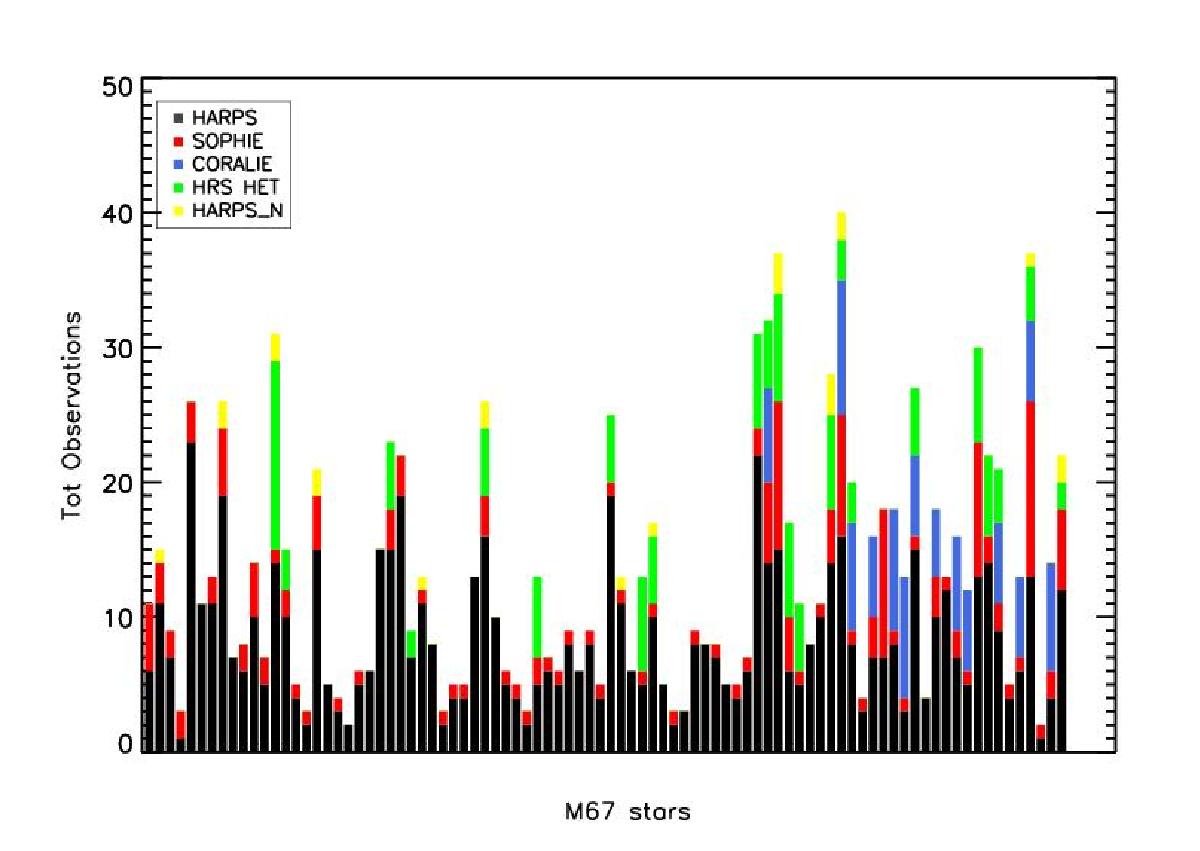