Context. The Sun is a highly dynamic environment that exhibits dynamic behavior on many different timescales. Variability is observed both in closed and in open field line regions in the solar corona. In particular, coronal holes exhibit temporal and spatial variability. Signatures of these coronal dynamics are inherited by the coronal hole wind streams that originate in these regions and can effect the Earth's magnetosphere. Both the cause of the observed variabilities and how these translate to fluctuations in the in situ observed solar wind is not yet fully understood.
Aims: During solar activity minimum the structure of the magnetic field typically remains stable over several Carrington rotations (CRs). But how stable is the solar magnetic field? Here, we address this question by analyzing the evolution of a coronal hole structure and the corresponding coronal hole wind stream emitted from this source region over 12 consecutive CRs in 2006.
Methods: To this end, we link in situ observations of Solar Wind Ion Composition Spectrometer (SWICS) onboard the Advanced Composition Explorer (ACE) with synoptic maps of Michelson Doppler imager (MDI) on the Solar and Heliospheric Observatory (SOHO) at the photospheric level through a combination of ballistic back-mapping and a potential field source surface (PFSS) approach. Together, these track the evolution of the open field line region that is identified as the source region of a recurring coronal hole wind stream. Under the assumptions of the freeze-in scenario for charge states in the solar wind, we derive freeze-in temperatures and determine the order in which the different charge state ratios of ion pairs appear to freeze-in. We call the combination of freeze-in temperatures derived from in situ observed ion density ratios and freeze-in order a minimal electron temperature profile and investigate its variability.
Results: The in situ properties and the PFSS model together probe the lateral magnetic field configuration, the minimal temperature profiles allow to constrain the radial structure. We find that the shape of the open field line region and to some extent also the solar wind properties are influenced by surrounding more dynamic closed loop regions. We show that the freeze-in order can change within a coronal hole wind stream on small timescales and illustrate a mechanism that can cause changes in the freeze-in order. The inferred minimal temperature profile is variable even within coronal hole wind and is in particular most variable in the outer corona. 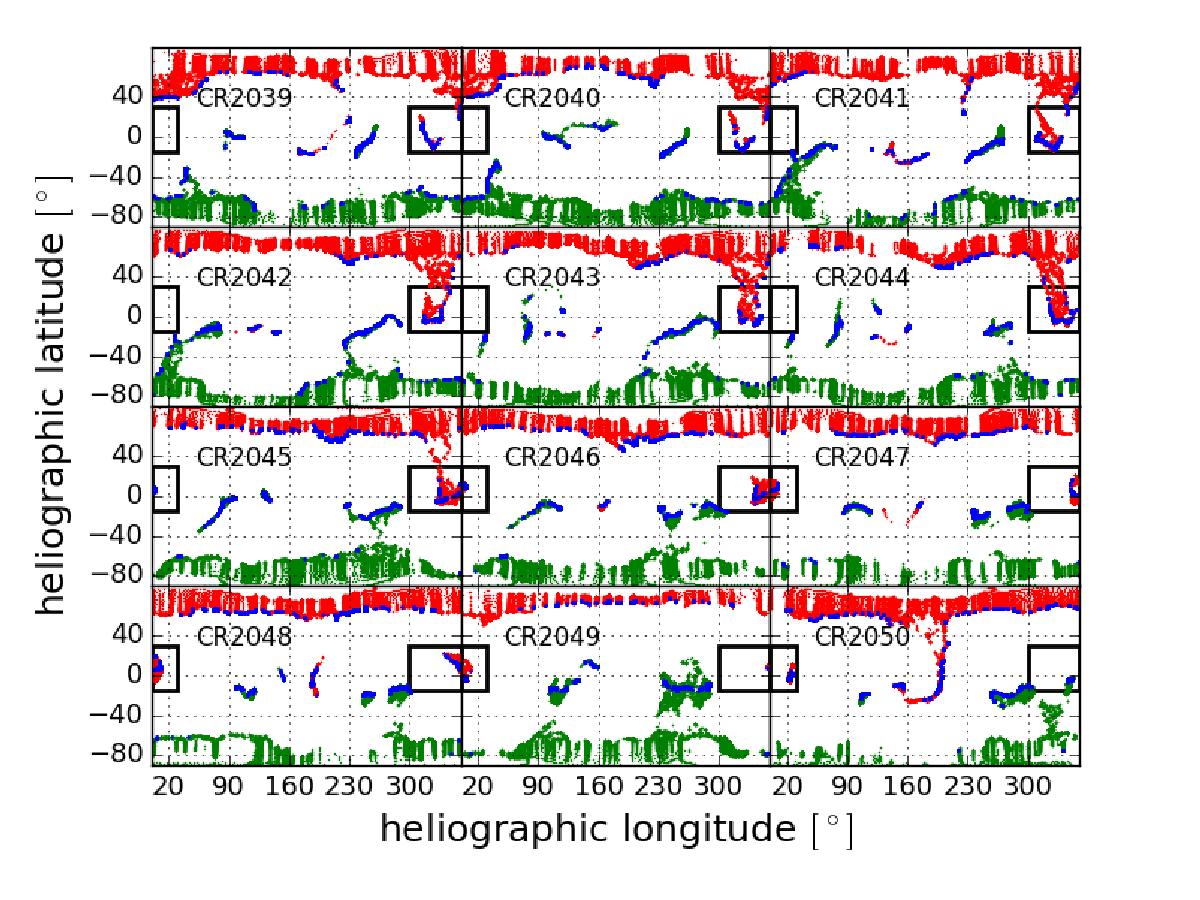