Context. Protostellar jets and outflows are key features of the star-formation process, and primary processes of the feedback of young stars on the interstellar medium. Understanding the underlying shocks is necessary to explain how jet and outflow systems are launched, and to quantify their chemical and energetic impacts on the surrounding medium.
Aims: We performed a high-spectral resolution study of the [OI]63μm emission in the outflow of the intermediate-mass Class 0 protostar Cep E-mm. The goal is to determine the structure of the outflow, to constrain the chemical conditions in the various components, and to understand the nature of the underlying shocks, thus probing the origin of the mass-loss phenomenon.
Methods: We present observations of the O I 3P1 → 3P2, OH between 2Π1/2J = 3/2 and J = 1/2 at 1837.8 GHz, and CO (16-15) lines with the GREAT receiver onboard SOFIA towards three positions in the Cep E protostellar outflow: Cep E-mm (the driving protostar), Cep E-BI (in the southern lobe), and Cep E-BII (the terminal position in the southern lobe).
Results: The CO (16-15) line is detected at all three positions. The [OI]63μm line is detected in Cep E-BI and BII, whereas the OH line is not detected. In Cep E-BII, we identify three kinematical components in O I and CO. These were already detected in CO transitions and relate to spatial components: the jet, the HH377 terminal bow-shock, and the outflow cavity. We measure line temperature and line integrated intensity ratios for all components. The O I column density is higher in the outflow cavity than in the jet, which itself is higher than in the terminal shock. The terminal shock is the region where the abundance ratio of O I to CO is the lowest (about 0.2), whereas the jet component is atomic (N(O I)/N(CO) ~ 2.7). In the jet, we compare the [OI]63μm observations with shock models that successfully fit the integrated intensity of 10 CO lines. We find that these models most likely do not fit the [OI]63μm data.
Conclusions: The high intensity of O I emission points towards the propagation of additional dissociative or alternative FUV-irradiated shocks, where the illumination comes from the shock itself. A picture emerges from the sample of low-to-high mass protostellar outflows, where similar observations have been performed, with the effects of illumination increasing with the mass of the protostar. These findings need confirmation with more observational constraints and a larger sample.

This article uses Herschel-PACS data; Herschel is an ESA space observatory with science instruments provided by European-led Principal Investigator consortia and with important participation from NASA. All spectra shown in Fig. 2 are only available at the CDS via anonymous ftp to http://cdsarc.u-strasbg.fr (http://130.79.128.5) or via http://cdsarc.u-strasbg.fr/viz-bin/qcat?J/A+A/602/A8 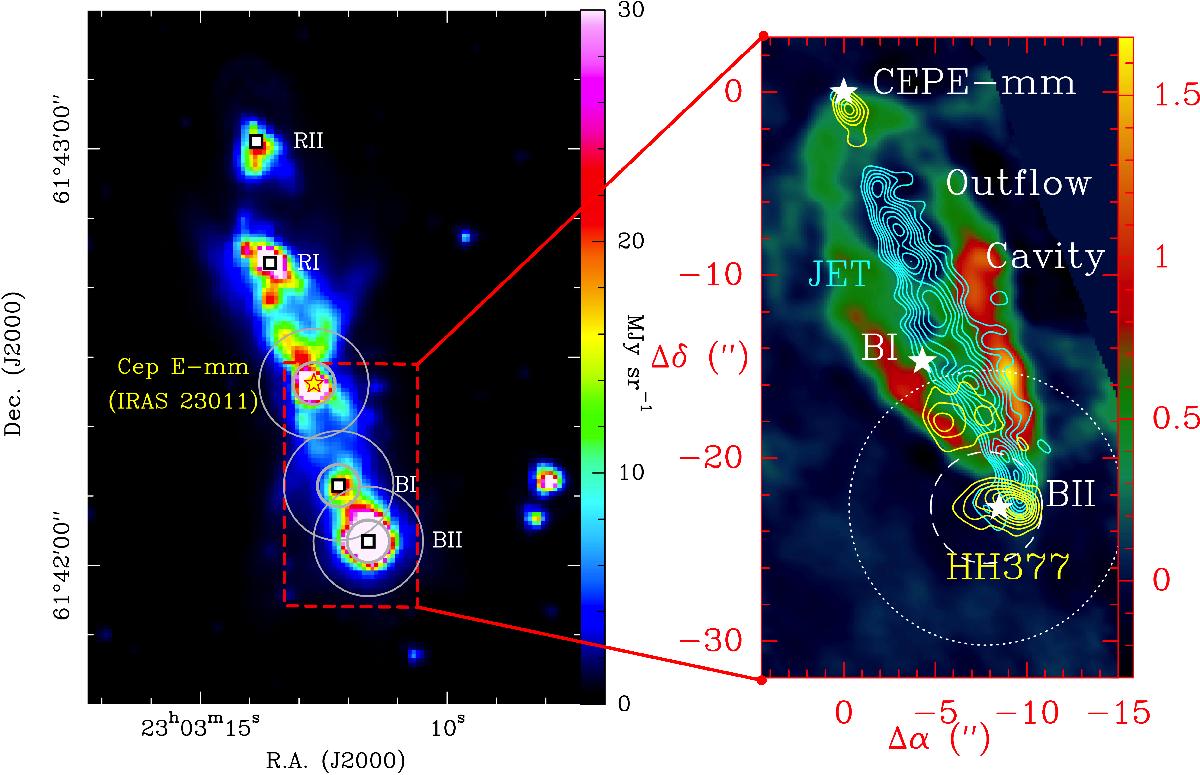