The VLT-FLAMES Tarantula Survey. XXVI. Properties of the O-dwarf population in 30 Doradus

Context. The VLT-FLAMES Tarantula Survey has observed hundreds of O-type stars in the 30 Doradus region of the Large Magellanic Cloud (LMC).
Aims: We study the properties of a statistically significant sample of O-type dwarfs in the same star-forming region and test the latest atmospheric and evolutionary models of the early main-sequence phase of massive stars.
Methods: We performed quantitative spectroscopic analysis of 105 apparently single O-type dwarfs. To determine stellar and wind parameters, we used the iacob-gbat package, an automatic procedure based on a large grid of atmospheric models that are calculated with the fastwind code. This package was developed for the analysis of optical spectra of O-type stars. In addition to classical techniques, we applied the Bayesian bonnsai tool to estimate evolutionary masses.
Results: We provide a new calibration of effective temperature vs. spectral type for O-type dwarfs in the LMC, based on our homogeneous analysis of the largest sample of such objects to date and including all spectral subtypes. Good agreement with previous results is found, although the sampling at the earliest subtypes could be improved. Rotation rates and helium abundances are studied in an evolutionary context. We find that most of the rapid rotators (v sin I > 300 km s-1) in our sample have masses below 25 M⊙ and intermediate rotation-corrected gravities (3.9 < log gc < 4.1). Such rapid rotators are scarce at higher gravities (I.e. younger ages) and absent at lower gravities (larger ages). This is not expected from theoretical evolutionary models, and does not appear to be due to a selection bias in our sample. We compare the estimated evolutionary and spectroscopic masses, finding a trend that the former is higher for masses below 20 M⊙. This can be explained as a consequence of limiting our sample to the O-type stars, and we see no compelling evidence for a systematic mass discrepancy. For most of the stars in the sample we were unable to estimate the wind-strength parameter (hence mass-loss rates) reliably, particularly for objects with lower luminosity (log L/L⊙ ≲ 5.1). Only with ultraviolet spectroscopy will we be able to undertake a detailed investigation of the wind properties of these dwarfs. 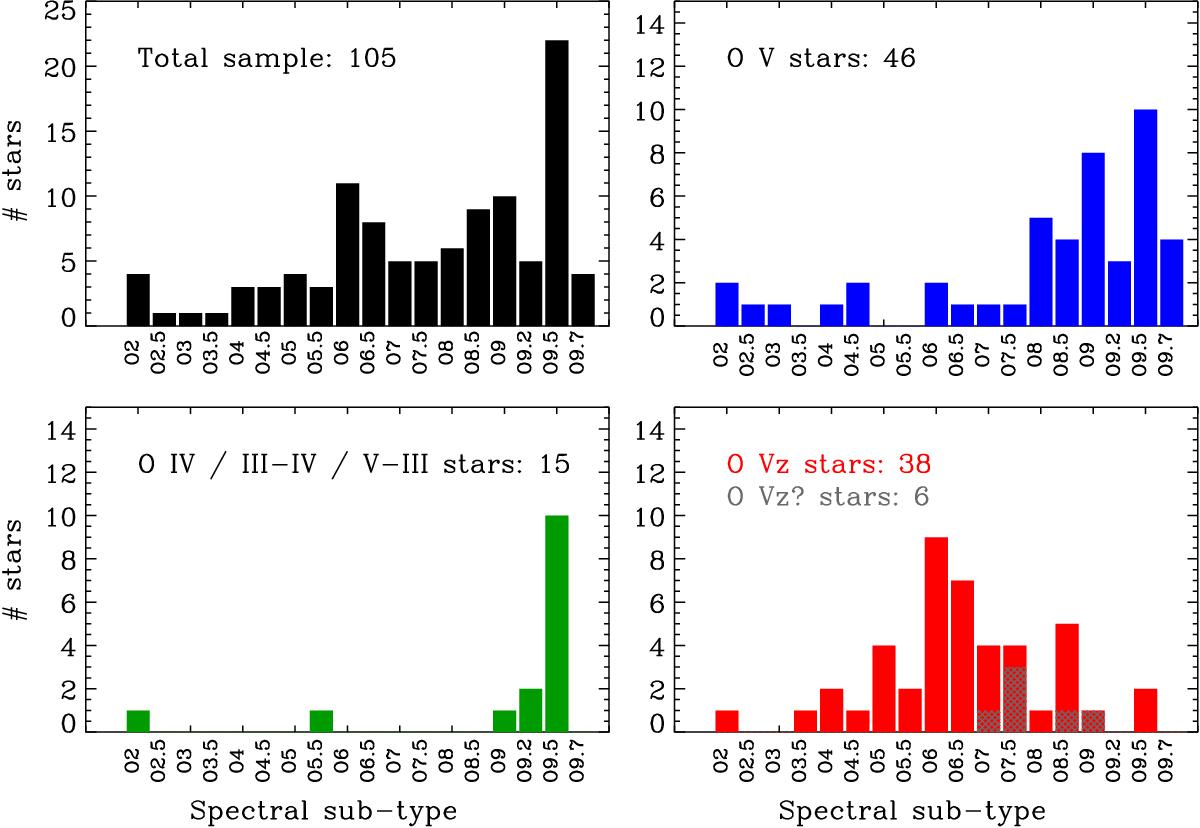