Context. During primary transits, the spectral signatures of exoplanet atmospheres can be measured using transmission spectroscopy. We can obtain information on the upper atmosphere of these planets by investigating the exoplanets' excess sodium absorption in the optical region. However, a number of factors can affect the observed sodium absorption signature. We present a detailed model correcting for systematic biases to yield an accurate depth for the sodium absorption in HD 189733b.
Aims: The goal of this work is to accurately measure the atomspheric sodium absorption light curve in HD 189733b, correcting for the effects of stellar differential limb-darkening, stellar activity, and a "bump" caused by the changing radial velocity of the exoplanet. In fact, owing to the high cadence and quality of our data, it is the first time that the last feature can be detected even by visual inspection.
Methods: We use 244 high-resolution optical spectra taken by the UVES instrument mounted at the VLT. Our observations cover a full transit of HD 189733b, with a cadence of 45 s. To probe the transmission spectrum of sodium we produce excess light curves integrating the stellar flux in passbands of 1 Å, 1.5 Å, and 3 Å inside the core of each sodium D-line. We model the effects of external sources on the excess light curves, which correspond to an observed stellar flare beginning close to mid-transit time and the wavelength dependent limb-darkening effects. In addition, by characterizing the effect of the changing radial velocity and Doppler shifts of the planetary sodium lines inside the stellar sodium lines, we estimate the depth and width of the exoplanetary sodium feature.
Results: We estimate the shape of the planetary sodium line by a Gaussian profile with an equivalent width of 0.0023 ± 0.0010Å, thereby confirming the presence of sodium in the atmosphere of HD 189733b with excess absorption levels of 0.72 ± 0.25%, 0.34 ± 0.11%, and 0.20 ± 0.06% for the integration bands of 1 Å, 1.5 Å, and 3 Å, respectively. Using the equivalent width of the planetary sodium line, we produce a first order estimate of the number density of sodium in the exoplanet atmosphere. 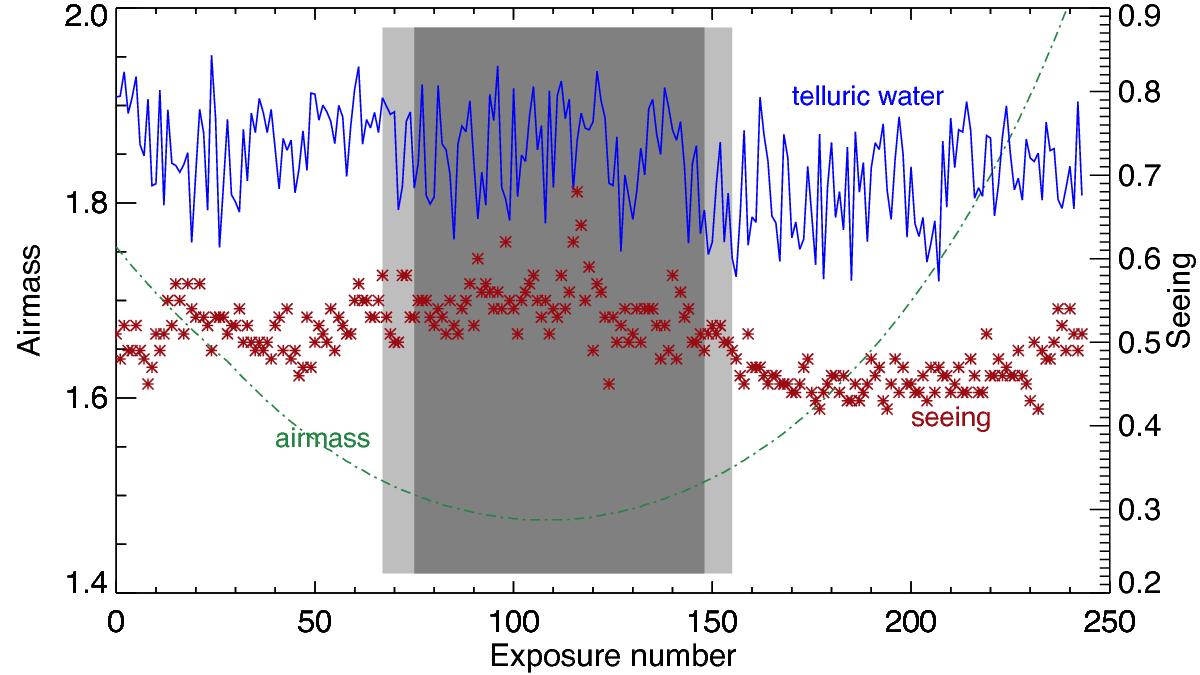