Context. Massive stars are important building blocks of the Universe, and their stellar structure and evolution models are fundamental cornerstones of various fields in modern astrophysics. The precision of these models is strongly limited by our lack of understanding of various internal mixing processes that significantly influence the lifetime of these objects, such as core overshoot, chemical mixing, or the internal differential rotation.
Aims: Our goal is to calibrate models by extending the sample of available seismic studies of slowly pulsating B (SPB) stars, providing input for theoretical modelling efforts that will deliver precise constraints on the parameters describing the internal mixing processes in these objects.
Methods: We used spectral synthesis and disentangling techniques to derive fundamental parameters and to determine precise orbital parameters from high-resolution spectra. We employed custom masks to construct light curves from the virtually uninterrupted four year long Kepler pixel data and used standard time-series analysis tools to construct a set of significant frequencies for each target. These sets were first filtered from combination frequencies, and then screened for period spacing patterns.
Results: We detect gravity mode period series of modes, of the same degree ℓ with consecutive radial order n, in four new and one revisited SPB star. These series (covering typically 10 to 40 radial orders) are clearly influenced by moderate to fast rotation and carry signatures of chemical mixing processes. Furthermore, they are predominantly prograde dipole series. Our spectroscopic analysis, in addition to placing each object inside the SPB instability strip and identifying KIC 4930889 as an SB2 binary, reveals that KIC 11971405 is a fast rotator that shows very weak Be signatures. Together with the observed photometric outbursts this illustrates that this Be star is a fast rotating SPB star. We hypothesise that the outbursts might be connected to its very densely compressed oscillation spectrum.

Based on observations made with the Mercator telescope, operated by the Flemish Community, and with the William Herschel Telescope operated by the Isaac Newton Group, both on the island of La Palma at the Spanish Observatorio del Roque de los Muchachos of the Instituto de Astrofísica de Canarias.Based on observations obtained with the Hermes spectrograph, which is supported by the Fund for Scientific Research of Flanders (FWO), Belgium, the Research Council of KU Leuven, Belgium, the Fonds National Recherches Scientific (FNRS), Belgium, the Royal Observatory of Belgium, the Observatoire de Genève, Switzerland, and the Thüringer Landessternwarte Tautenburg, Germany. 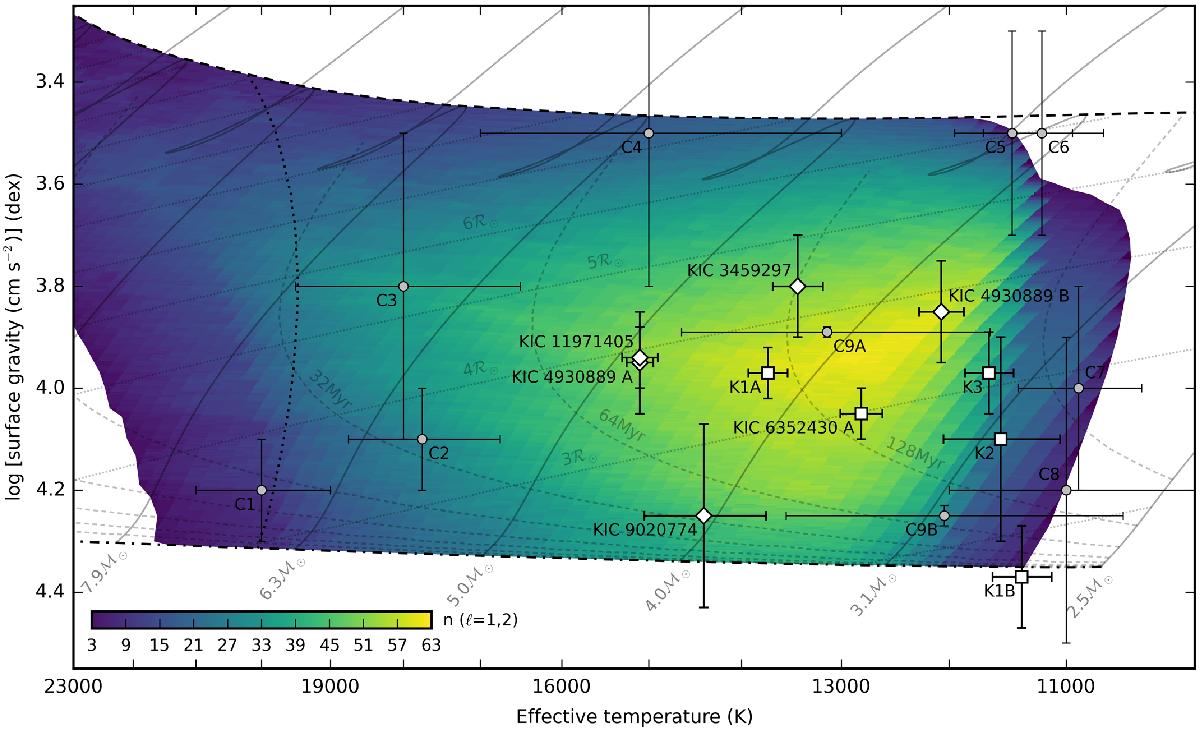