A critical reassessment of the fundamental properties of GJ 504: chemical composition and age

Context. The recent development of brand new observational techniques and theoretical models have greatly advanced the exoplanet research field. Despite significant achievements, which have allowed the detection of thousands extrasolar systems, a comprehensive understanding of planetary formation and evolution mechanisms is still desired. One relevant limitation is given by the accuracy in the measurements of planet-host star ages. The star GJ 504 has been found to host a substellar companion whose nature is strongly debated. There has been a recent difference of opinion in the literature owing to the uncertainty on the age of the system: a young age of 160 Myr would imply a giant planet as a companion, but a recent revision pointing to a solar age ( 4 Gyr) instead suggests a brown dwarf.
Aims: With the aim of shedding light on this debated topic, we have carried out a high-resolution spectroscopic study of GJ 504 to derive stellar parameters, metallicity, and abundances of both light and heavy elements, providing a full chemical characterisation. The main objective is to infer clues on the evolutionary stage (hence the age) of this system.
Methods: We performed a strictly differential (line-by-line) analysis of GJ 504 with respect to two reference stars, that is the planet-host dwarf ι Hor and the subgiant HIP 84827. The former is crucial in this context because its stellar parameters (hence the evolutionary stage) is well constrained from asteroseismic observations. Regardless of the zero point offsets, our differential approach allows us to put tight constraints on the age of GJ 504 with respect to ι Hor, thereby minimising the internal uncertainties.
Results: We found that the surface gravity of GJ 504 is 0.2 ± 0.07 dex lower than that of the main-sequence star ι Hor, suggesting a past turn-off evolution for our target. The isochrone comparison provides us with an age range between 1.8 and 3.5 Gyr, with a most probable age of ≈2.5 Gyr. Thus, our findings support an old age for the system; further evidence comes from the barium abundance, which is compatible with a solar pattern and not enhanced as observed in young stars.
Conclusions: We envisaged a possible engulfment scenario to reconcile all the age indicators (spectroscopy, isochrones, rotation, and activity); this engulfment could have occurred very recently and could be responsible for the enhanced levels of rotation and chromospheric activity, as previously suggested. We tested this hypothesis, exploiting a tidal evolution code and finding that the engulfment of a hot Jupiter, with mass not larger than ≈3 Mj and initially located at ≈0.03 AU, seems to be a very likely scenario. 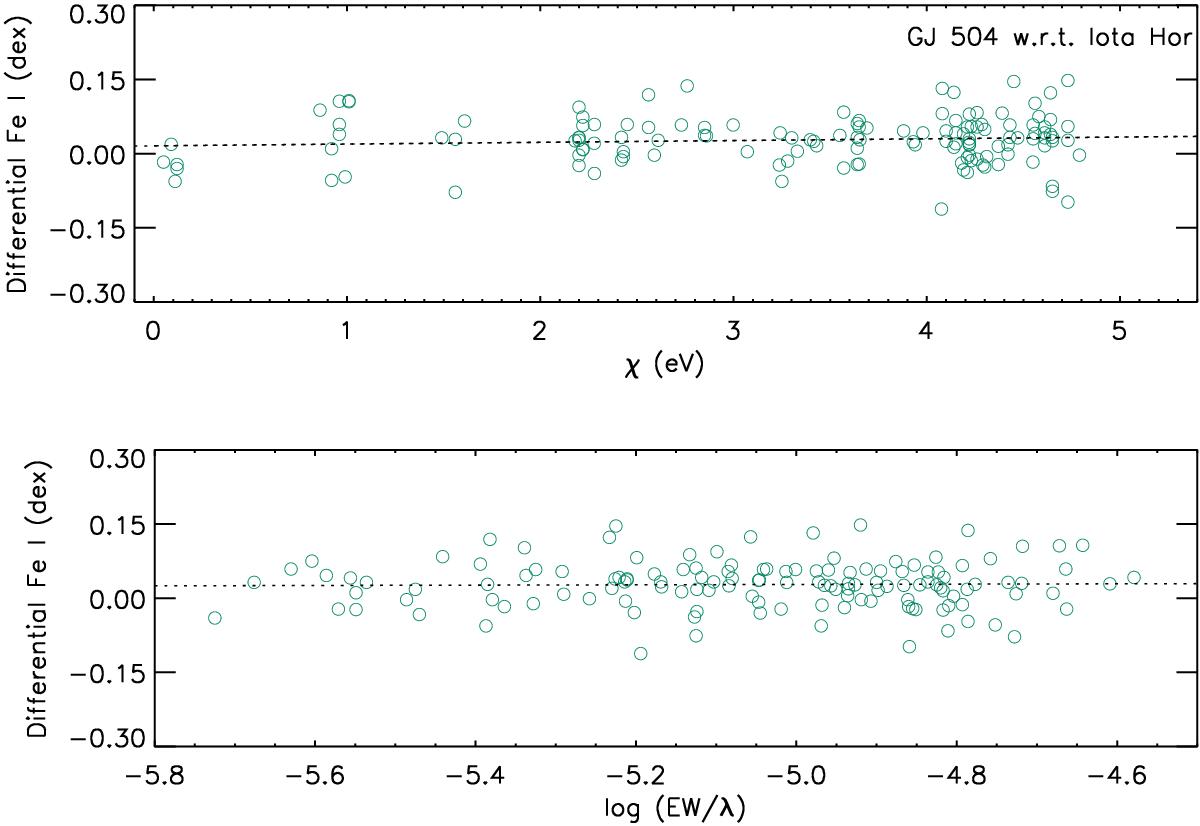