Feedback of atomic jets from embedded protostars in NGC 1333

Context. The feedback of star formation to the parent cloud is conventionally examined through the study of molecular outflows. Little is known, however, about the effect that atomic ejecta tracing fast shocks can have on small scales or on global cloud properties.
Aims: Our immediate objective is to study the morphology of protostellar ejecta through far-infrared atomic lines, compare them to other outflow tracers, and associate them with their driving sources. The main goal is to study the feedback from atomic jet emission that is excited by fast shocks on the parent cloud material, and examine the relative importance of atomic jets as regulators of the star formation process.
Methods: We employed [O I] and [C II] line maps of the NGC 1333 star-forming region observed with Herschel/PACS. We studied the detailed morphology and velocity distribution of the [O I] line using channel and line-centroid maps. We derived the momentum, energy, and mass flux for all the bipolar outflows traced by [O I] line emission. We compared the [O I] morphology to CO and H2 emission, and its dynamical and kinematic properties to the emission corresponding to CO outflows.
Results: We find that the line-centroid maps can trace velocity structures down to 5 km s-1 which is a factor of 20 beyond the nominal velocity resolution reached by Herschel/PACS. These maps reveal an unprecedented degree of details that significantly assist in the association and characterization of outflows. We associate most of the [O I] emission with ejecta from embedded protostars. The spatial distribution of the [O I] emission closely follows the CO emission pattern and strongly correlates to the spatial distribution of the H2 emission, with the latter indicating excitation in shocks. The [O I] momentum accounts for only 1% of the momentum carried by the large-scale CO outflows. The energy released in shocks, however, corresponds to 50-100% of the energy carried away by outflows. Mass-flux estimates of the atomic gas range between 10-6 and 10-7M⊙ km s-1, which is in line with previous estimations.
Conclusions: The detailed study of line-centroid shifts in maps introduced for the first time in this study can provide an invaluable tool for the study of outflows. Assuming that the [O I] corresponds to an atomic jet that also drives the CO outflow, we find that the mass traced by [O I] corresponds to a small fraction compared to the mass corresponding to the CO outflows. This may indicate that only a small fraction of the mass of atomic jets is excited in shocks, which is consistent with the sizes of the shock-cooling zones compared to the total jet length. The estimated ratios of the jet to the outflow momenta and energies are also consistent with the results of two-component, nested jet and outflow simulations, where jets are associated with episodic accretion events. The mass flux from the [O I] calculated here and in other studies shows no clear evolutionary pattern with the age of the parent source, which is in support of the scenario that jets are associated with episodic accretion events. The energy contribution of the jet-induced shocks to the cloud, is important and can equal the energy deposited by outflows. We therefore conclude that the atomic component, either ejected or formed in shocks plays an important role in generating and maintaining turbulence in clouds but also in dissipating the cloud gas. 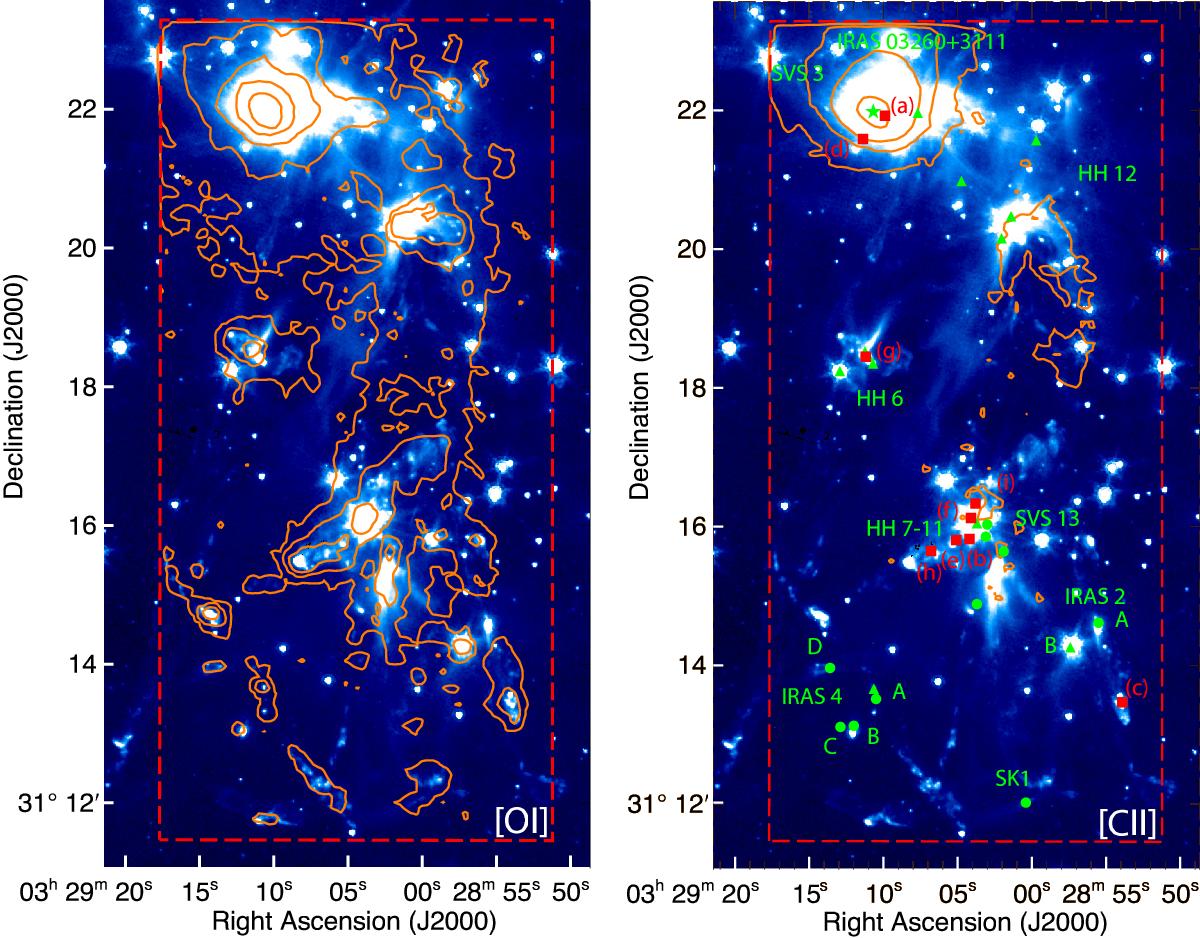