Context. The origin of brown dwarfs is still under debate. While some models predict a star-like formation scenario, others invoke a substellar mass embryo ejection, a stellar disk fragmentation, or the photo-evaporation of an external core due to the presence of massive stars.
Aims: The aim of our work is to characterize the youngest and lowest mass population of the dark cloud Barnard 30, a region within the Lambda Orionis star-forming region. In particular, we aim to identify proto-brown dwarfs and study the mechanism of their formation.
Methods: We obtained ALMA continuum observations at 880 μm of 30 sub-mm cores previously identified with APEX/LABOCA at 870 μm. We have complemented part of the ALMA data with sub-mm APEX/SABOCA observations at 350 μm, and with multi-wavelength ancillary observations from the optical to the far-infrared (e.g., Spitzer, CAHA/O2000, WISE, INT/WFC).
Results: We report the detection of five (out of 30) spatially unresolved sources with ALMA, with estimated masses between 0.9 and 67 MJup. From these five sources, only two show gas emission. The analysis of multi-wavelength photometry from these two objects, namely B30-LB14 and B30-LB19, is consistent with one Class II- and one Class I low-mass stellar object, respectively. The gas emission is consistent with a rotating disk in the case of B30-LB14, and with an oblate rotating envelope with infall signatures in the case of LB19. The remaining three ALMA detections do not have infrared counterparts and can be classified as either deeply embedded objects or as starless cores if B30 members. In the former case, two of them (LB08 and LB31) show internal luminosity upper limits consistent with Very Low Luminosity objects, while we do not have enough information for LB10. In the starless core scenario, and taking into account the estimated masses from ALMA and the APEX/LABOCA cores, we estimate final masses for the central objects in the substellar domain, so they could be classified as pre-BD core candidates. According to the turbulent fragmentation scenario, the three ALMA pre-BD core candidates should be gravitationally stable based on APEX/LABOCA data. However, this result is not consistent with the presence of compact sources inside the cores, indicative of on-going collapse. As an alternative scenario we propose that these cores could be the result of on-going gravitational contraction. Indeed, we have verified that their estimated masses are consistent with the ones expected within an ALMA beam for a r-2 density profile, which is typical for a collapsing core.
Conclusions: ALMA observations have allowed us to detect very low-mass compact sources within three APEX/LABOCA cores. Future observations will help us to unveil their true nature. 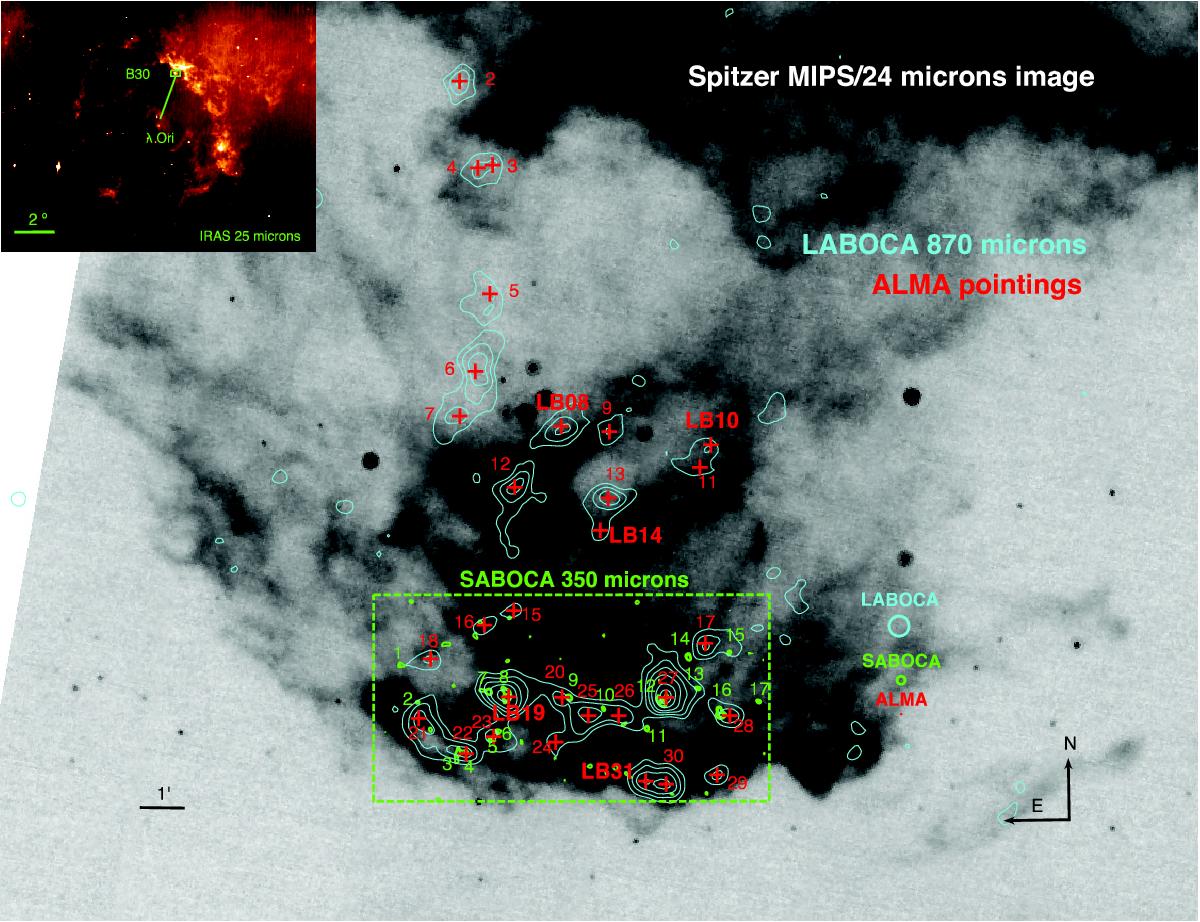