Context. Accretion outbursts are key elements in star formation. ASASSN-13db is a M5-type star with a protoplanetary disk, the lowest-mass star known to experience accretion outbursts. Since its discovery in 2013, it has experienced two outbursts, the second of which started in November 2014 and lasted until February 2017.
Aims: We explore the photometric and spectroscopic behavior of ASASSN-13db during the 2014-2017 outburst.
Methods: We use high- and low-resolution spectroscopy and time-resolved photometry from the ASAS-SN survey, the LCOGT and the Beacon Observatory to study the light curve of ASASSN-13db and the dynamical and physical properties of the accretion flow.
Results: The 2014-2017 outburst lasted for nearly 800 days. A 4.15 d period in the light curve likely corresponds to rotational modulation of a star with hot spot(s). The spectra show multiple emission lines with variable inverse P-Cygni profiles and a highly variable blue-shifted absorption below the continuum. Line ratios from metallic emission lines (Fe I/Fe II, Ti I/Ti II) suggest temperatures of 5800-6000 K in the accretion flow.
Conclusions: Photometrically and spectroscopically, the 2014-2017 event displays an intermediate behavior between EXors and FUors. The accretion rate ([Ṁ]= 1-3 × 10-7 M⊙/yr), about two orders of magnitude higher than the accretion rate in quiescence, is not significantly different from the accretion rate observed in 2013. The absorption features in the spectra suggest that the system is viewed at a high angle and drives a powerful, non-axisymmetric wind, maybe related to magnetic reconnection. The properties of ASASSN-13db suggest that temperatures lower than those for solar-type stars are needed for modeling accretion in very-low-mass systems. Finally, the rotational modulation during the outburst reveals that accretion-related structures settle after the beginning of the outburst and can be relatively stable and long-lived. Our work also demonstrates the power of time-resolved photometry and spectroscopy to explore the properties of variable and outbursting stars. 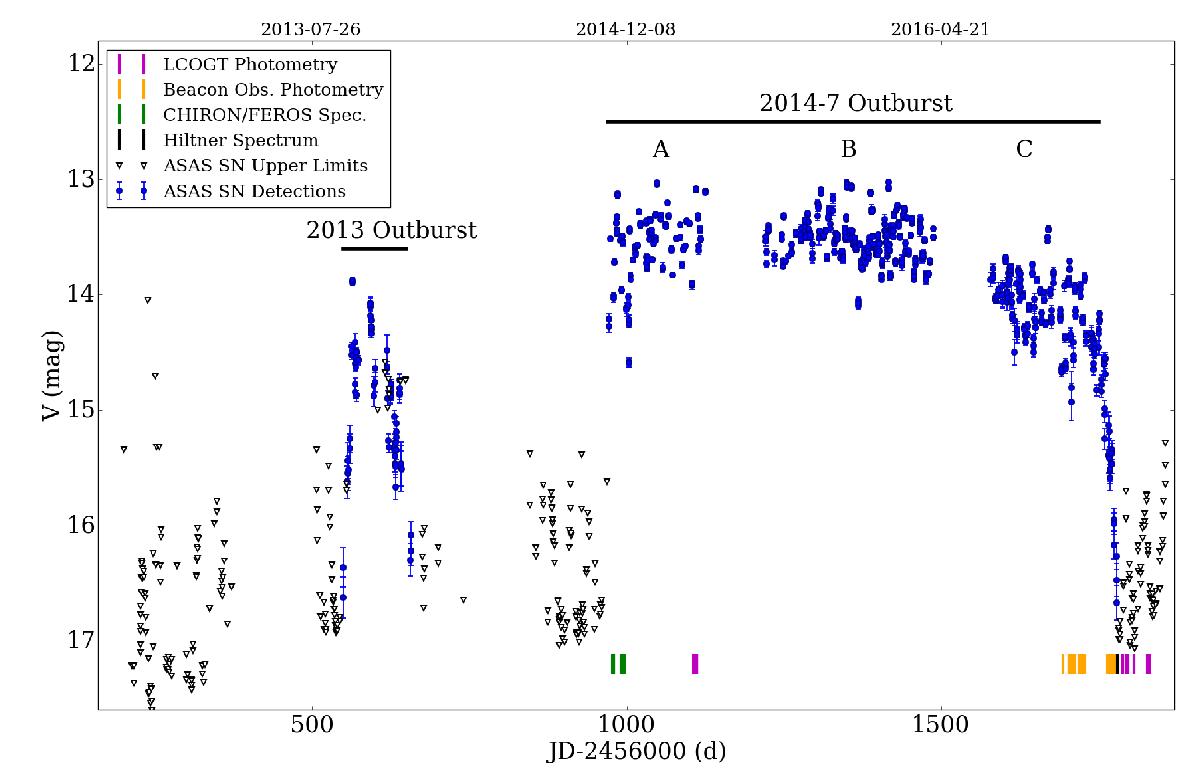