Context. The Sagittarius B2 molecular cloud contains several sites forming high-mass stars. Sgr B2(N) is one of its main centers of activity. It hosts several compact and ultra-compact HII regions, as well as two known hot molecular cores (Sgr B2(N1) and Sgr B2(N2)) in the early stage of the high-mass star formation process, where complex organic molecules (COMs) are detected in the gas phase.
Aims: Our goal is to use the high sensitivity of the Atacama Large Millimeter/submillimeter Array (ALMA) to characterize the hot core population in Sgr B2(N) and thereby shed new light on the star formation process in this star-forming region.
Methods: We use a complete 3 mm spectral line survey conducted with ALMA to search for faint hot cores in the Sgr B2(N) region. The chemical composition of the detected sources and the column densities are derived by modeling the whole spectra under the assumption of local thermodynamic equilibrium. Population diagrams are constructed to fit rotational temperatures. Integrated intensity maps are produced to derive the peak position and fit the size of each molecule's emission distribution. The kinematic structure of the hot cores is investigated by analyzing the line wing emission of typical outflow tracers. The H2 column densities are computed from ALMA and SMA continuum emission maps.
Results: We report the discovery of three new hot cores in Sgr B2(N) that we call Sgr B2(N3), Sgr B2(N4), and Sgr B2(N5). The three sources are associated with class II methanol masers, well known tracers of high-mass star formation, and Sgr B2(N5), also with a UCHII region. Their H2 column densities are found to be between approximately 16 and 36 times lower than the one of the main hot core Sgr B2(N1). The spectra of these new hot cores have spectral line densities of 11 up to 31 emission lines per GHz above the 7σ level, assigned to 22-25 molecules plus 13-20 less abundant isotopologs. We derive rotational temperatures of approximately 140-180 K for the three new hot cores and mean source sizes of 0.4″ for Sgr B2(N3) and 1.0″ for Sgr B2(N4) and Sgr B2(N5). The chemical composition of Sgr B2(N3), Sgr B2(N4), and Sgr B2(N5) is very similar, but it differs from that of Sgr B2(N2). Finally, Sgr B2(N3) and Sgr B2(N5) show high-velocity wing emission in typical outflow tracers, with a bipolar morphology in their integrated intensity maps suggesting the presence of an outflow, like in Sgr B2(N1). No sign of an outflow is found around Sgr B2(N2) and Sgr B2(N4). We derive statistical lifetimes of 4 × 104 yr for the class II methanol maser phase and 6 × 104 yr for the hot core phase in Sgr B2(N).
Conclusions: The associations of the hot cores with class II methanol masers, outflows, and/or UCHII regions tentatively suggest the following age sequence: Sgr B2(N4), Sgr B2(N3), SgrB2(N5), Sgr B2(N1). The status of Sgr B2(N2) is unclear. It may contain two distinct sources, a UCHII region and a very young hot core. 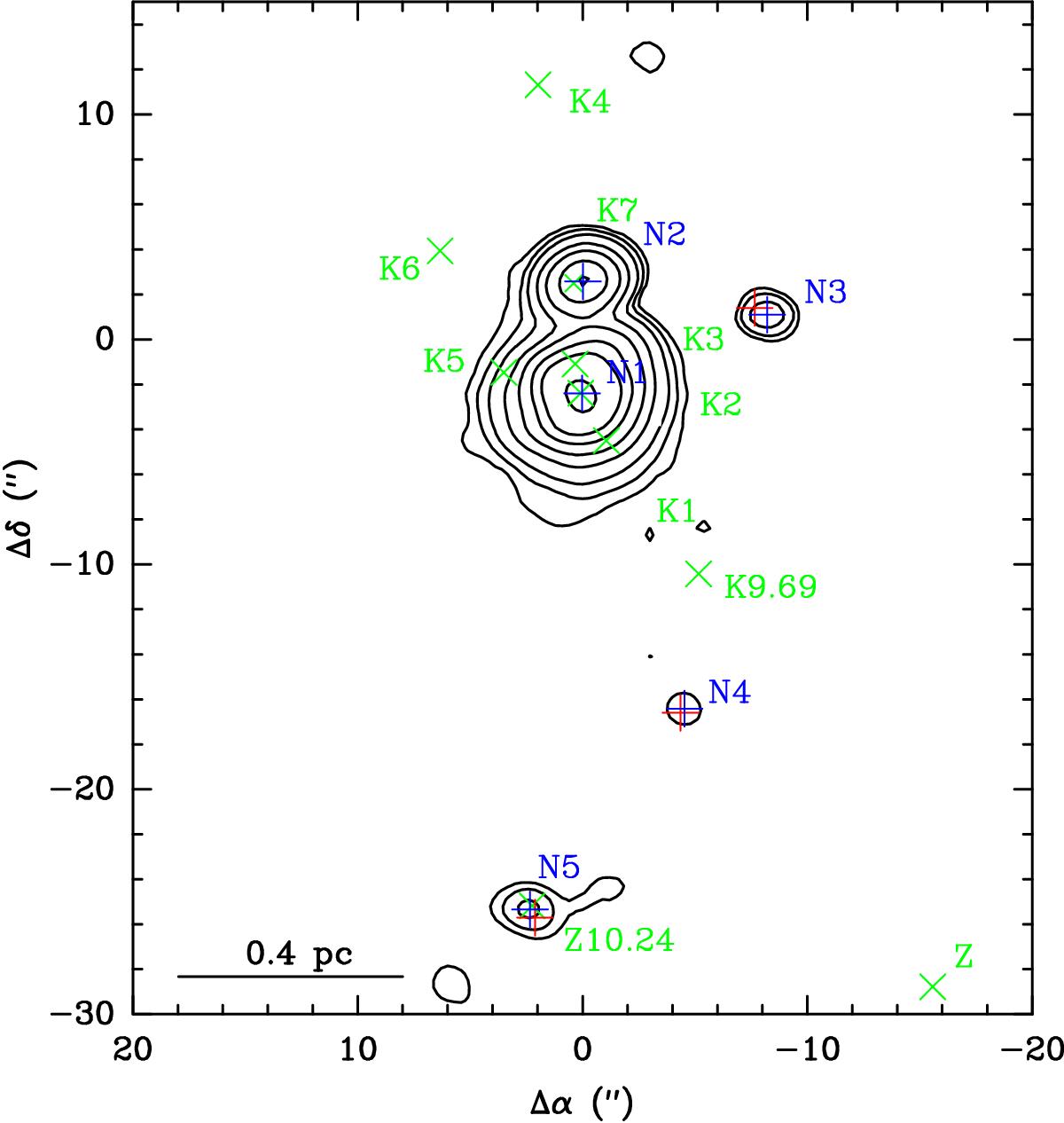