The complexity of Orion: an ALMA view. I. Data and first results

Context. We wish to improve our understanding of the Orion central star formation region (Orion-KL) and disentangle its complexity.
Aims: We collected data with ALMA during cycle 2 in 16 GHz of total bandwidth spread between 215.1 and 252.0 GHz with a typical sensitivity of 5 mJy/beam (2.3 mJy/beam from 233.4 to 234.4 GHz) and a typical beam size of 1.̋7 × 1.̋0 (average position angle of 89°). We produced a continuum map and studied the emission lines in nine remarkable infrared spots in the region including the hot core and the compact ridge, plus the recently discovered ethylene glycol peak.
Methods: We present the data, and report the detection of several species not previously seen in Orion, including n- and i-propyl cyanide (C3H7CN), and the tentative detection of a number of other species including glycolaldehyde (CH2(OH)CHO). The first detections of gGg' ethylene glycol (gGg' (CH2OH)2) and of acetic acid (CH3COOH) in Orion are presented in a companion paper. We also report the possible detection of several vibrationally excited states of cyanoacetylene (HC3N), and of its 13C isotopologues. We were not able to detect the 16O18O line predicted by our detection of O2 with Herschel, due to blending with a nearby line of vibrationally excited ethyl cyanide. We do not confirm the tentative detection of hexatriynyl (C6H) and cyanohexatriyne (HC7N) reported previously, or of hydrogen peroxide (H2O2) emission.
Results: We report a complex velocity structure only partially revealed before. Components as extreme as -7 and +19 km s-1 are detected inside the hot region. Thanks to different opacities of various velocity components, in some cases we can position these components along the line of sight. We propose that the systematically redshifted and blueshifted wings of several species observed in the northern part of the region are linked to the explosion that occurred ~500 yr ago. The compact ridge, noticeably farther south displays extremely narrow lines (~1 km s-1) revealing a quiescent region that has not been affected by this explosion. This probably indicates that the compact ridge is either over 10 000 au in front of or behind the rest of the region.
Conclusions: Many lines remain unidentified, and only a detailed modeling of all known species, including vibrational states of isotopologues combined with the detailed spatial analysis offered by ALMA enriched with zero-spacing data, will allow new species to be detected.

This paper makes use of the following ALMA data: ADS/JAO.ALMA#2013.1.00533.S. ALMA is a partnership of ESO (representing its member states), NSF (USA) and NINS (Japan), together with NRC (Canada), NSC and ASIAA (Taiwan), and KASI (Republic of Korea), in cooperation with the Republic of Chile. The Joint ALMA Observatory is operated by ESO, AUI/NRAO and NAOJ. The reduced ALMA data cubes as listed in Table 1 are available at the CDS via anonymous ftp to http://cdsarc.u-strasbg.fr (http://130.79.128.5) or via http://cdsarc.u-strasbg.fr/viz-bin/qcat?J/A+A/604/A32 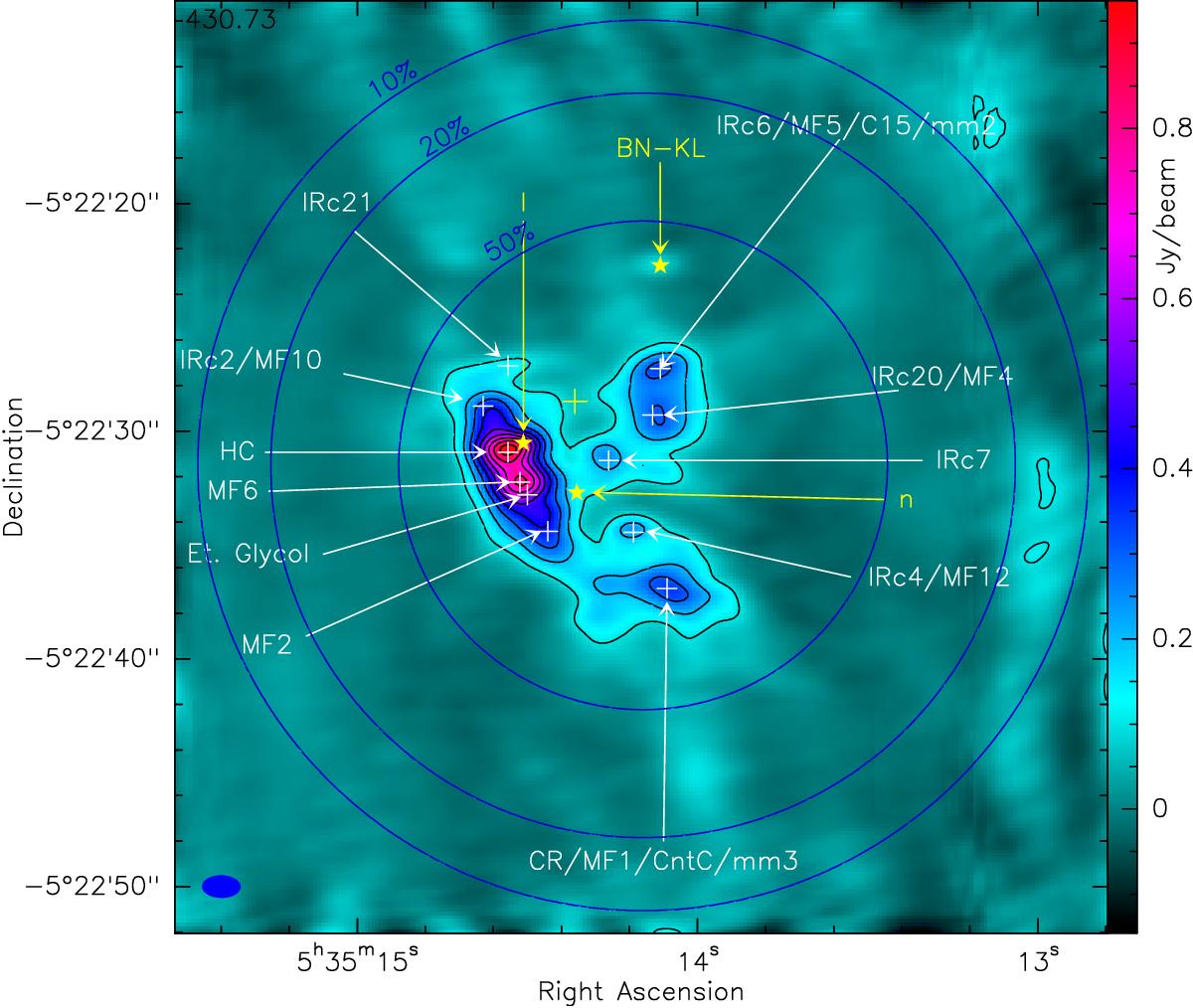