Context. Until recently almost nothing was known about the evolution of magnetic fields found in upper main sequence Ap/Bp stars during their long main sequence lifetime. We are thus studying magnetic Ap/Bp stars in open clusters in order to obtain observational evidence of how the properties of Ap/Bp magnetic stars, such as field strength and structure, evolve with age during the main sequence. One important aspect of this study is to search for the very rare examples of hot magnetic stars in short-period binary systems among magnetic cluster members.
Aims: In this paper we characterise the object BD-19 5044L, which is both a member of the open cluster IC 4725 = M 25, and a short-period SB2 system containing a magnetic primary star.
Methods: We have obtained a series of intensity and circular polarisation spectra distributed through the orbital and rotation cycles of BD-19 5044L with the ESPaDOnS spectropolarimeter at CFHT. From these data we determine the orbital and stellar properties of each component.
Results: We find that the orbit of BD-19 5044L AB is quite eccentric (e = 0.477), with a period of 17.63 d. The primary is a magnetic Bp star with a variable longitudinal magnetic field, a polar field strength of 1400 G and a low obliquity, while the secondary is probably a hot Am star and does not appear to be magnetic. The rotation period of the primary (5.04 d) is not synchronised with the orbit, but the rotation angular velocity is close to being synchronised with the orbital angular velocity of the secondary at periastron, perhaps as a result of tidal interactions. Because this system is a member of IC 4725, the two stars have a common age of log t = 8.02 ± 0.05 dex.
Conclusions: The periastron separation is small enough (about 12 times the radius of the primary star) that BD-19 5044L may be one of the very rare known cases of a tidally interacting SB2 binary system containing a magnetic Ap/Bp star.

Based in part on observations obtained at the Canada-France-Hawaii Telescope (CFHT) which is operated by the National Research Council of Canada, the Institut National des Sciences de l'Univers of the Centre National de la Recherche Scientifique of France, and the University of Hawaii. 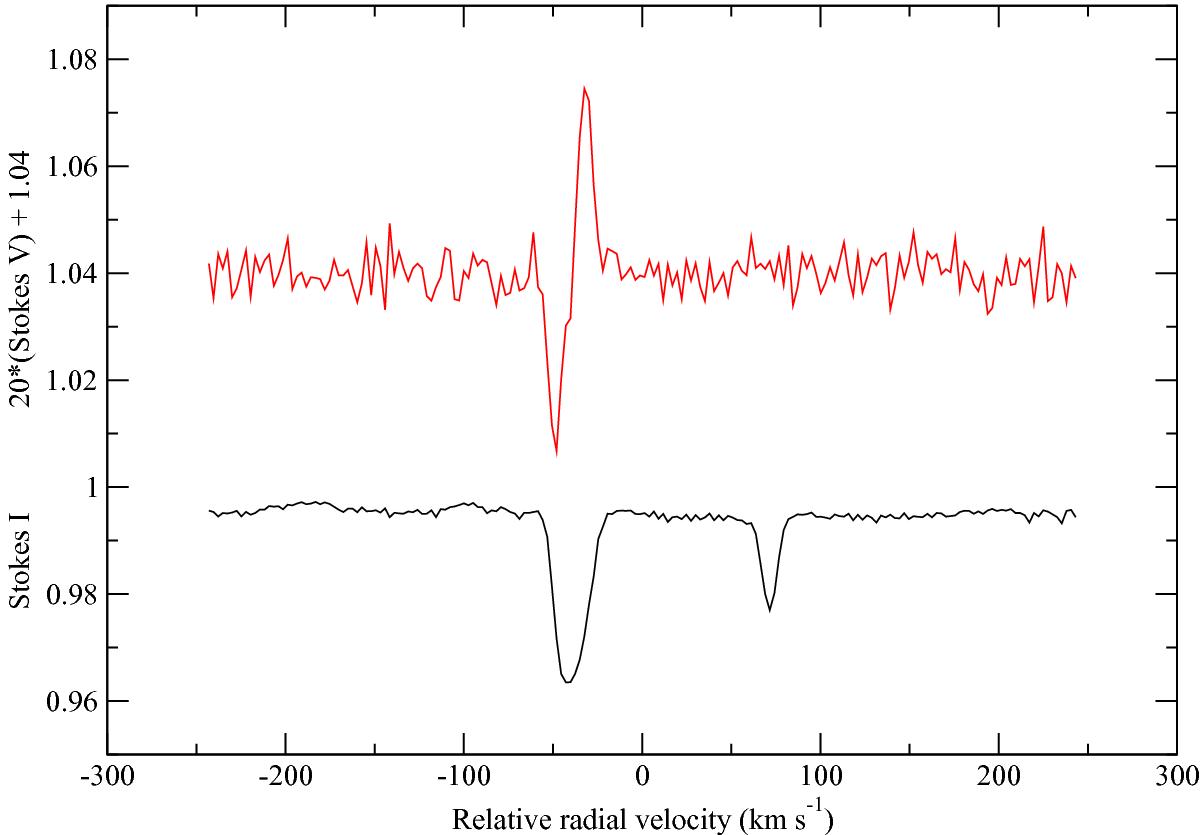