Outflows, infall and evolution of a sample of embedded low-mass protostars. The William Herschel Line Legacy (WILL) survey

Context. Herschel observations of water and highly excited CO (J > 9) have allowed the physical and chemical conditions in the more active parts of protostellar outflows to be quantified in detail for the first time. However, to date, the studied samples of Class 0/I protostars in nearby star-forming regions have been selected from bright, well-known sources and have not been large enough for statistically significant trends to be firmly established.
Aims: We aim to explore the relationships between the outflow, envelope and physical properties of a flux-limited sample of embedded low-mass Class 0/I protostars.
Methods: We present spectroscopic observations in H2O, CO and related species with Herschel HIFI and PACS, as well as ground-based follow-up with the JCMT and APEX in CO, HCO+ and isotopologues, of a sample of 49 nearby (d < 500 pc) candidate protostars selected from Spitzer and Herschel photometric surveys of the Gould Belt. This more than doubles the sample of sources observed by the WISH and DIGIT surveys. These data are used to study the outflow and envelope properties of these sources. We also compile their continuum spectral energy distributions (SEDs) from the near-IR to mm wavelengths in order to constrain their physical properties (e.g. Lbol, Tbol and Menv).
Results: Water emission is dominated by shocks associated with the outflow, rather than the cooler, slower entrained outflowing gas probed by ground-based CO observations. These shocks become less energetic as sources evolve from Class 0 to Class I. Outflow force, measured from low-J CO, also decreases with source evolutionary stage, while the fraction of mass in the outflow relative to the total envelope (I.e. Mout/Menv) remains broadly constant between Class 0 and I. The median value of 1% is consistent with a core to star formation efficiency on the order of 50% and an outflow duty cycle on the order of 5%. Entrainment efficiency, as probed by FCO/Ṁacc, is also invariant with source properties and evolutionary stage. The median value implies a velocity at the wind launching radius of 6.3 km s-1, which in turn suggests an entrainment efficiency of between 30 and 60% if the wind is launched at 1 AU, or close to 100% if launched further out. L[O I] is strongly correlated with Lbol but not with Menv, in contrast to low-J CO, which is more closely correlated with the latter than the former. This suggests that [O I] traces the present-day accretion activity of the source while CO traces time-averaged accretion over the dynamical timescale of the outflow. H2O is more strongly correlated with Menv than Lbol, but the difference is smaller than low-J CO, consistent with water emission primarily tracing actively shocked material between the wind, traced by [O I], and the entrained molecular outflow, traced by low-J CO. L[O I] does not vary from Class 0 to Class I, unlike CO and H2O. This is likely due to the ratio of atomic to molecular gas in the wind increasing as the source evolves, balancing out the decrease in mass accretion rate. Infall signatures are detected in HCO+ and H2O in a few sources, but still remain surprisingly illusive in single-dish observations. 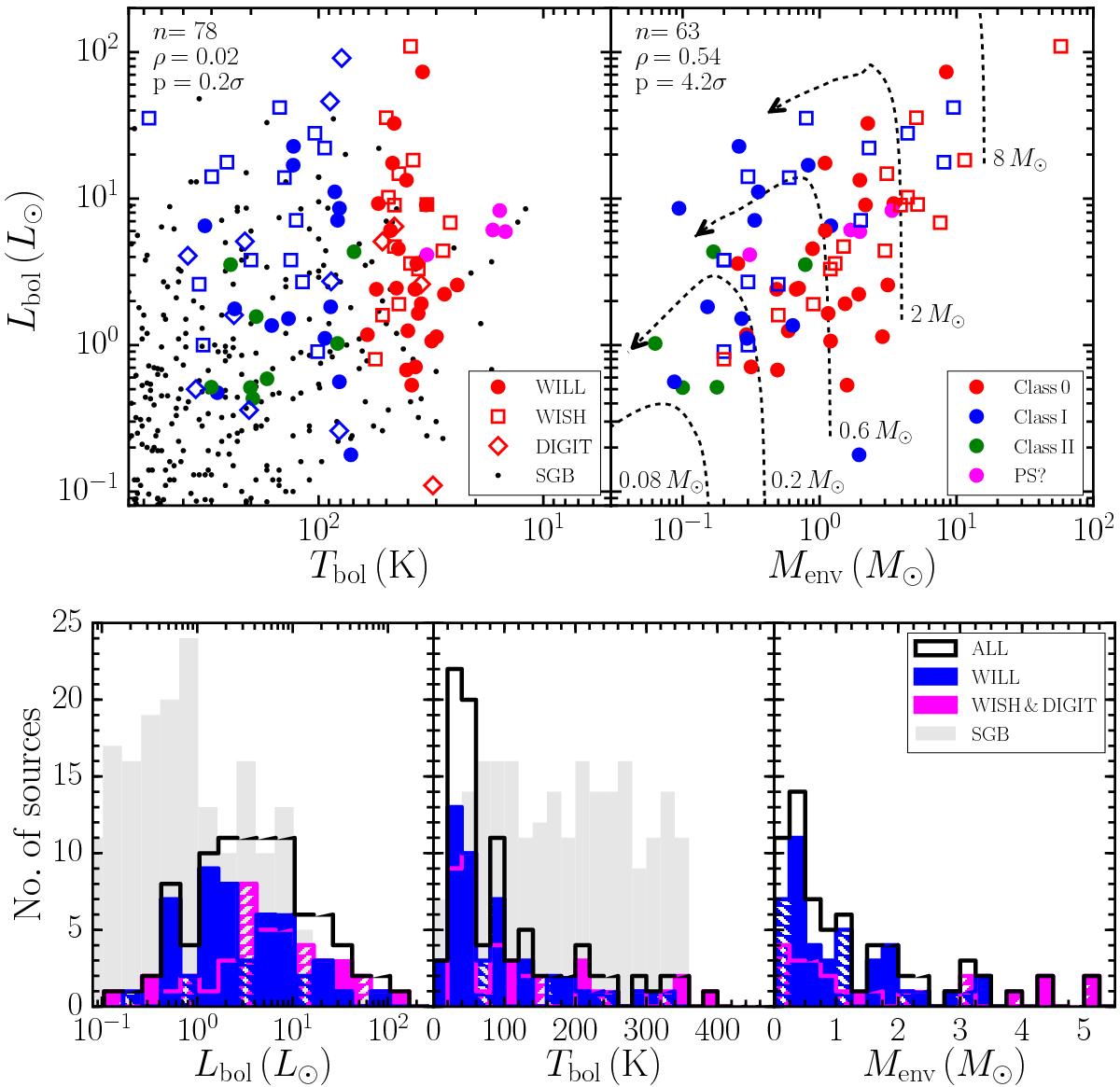