Temperature and density structure of a recurring active region jet


Aims: We present a study of a recurring jet observed on October 31, 2011 by the Atmosphereic Imaging Assembly (AIA) on board the Solar Dynamic Observatory, the X-ray Telescope (XRT) and EUV Imaging Spectrometer (EIS) on board Hinode. We discuss the physical parameters of the jet that are obtained using imaging and spectroscopic observations, such as density, differential emission measure, peak temperature, velocity, and filling factor.
Methods: A differential emission measure (DEM) analysis was performed at the region of the jet spire and the footpoint using EIS observations and also by combining AIA and XRT observations. The resulting EIS DEM curves were compared to those obtained with AIA-XRT. The DEM curves were used to create synthetic spectra with the CHIANTI atomic database. The predicted total count rates for each AIA channel were compared with the observed count rates. The effects of varying elemental abundances and the temperature range for the DEM inversion were investigated. Spectroscopic diagnostics were used to obtain an electron number density distribution for the jet spire and the jet footpoint.
Results: The plasma along the line of sight in the jet spire and jet footpoint was found to be peak at 2.0 MK (log T [K] = 6.3). We calculated electron densities using the Fe XII (λ186/λ195) line ratio in the region of the spire (Ne = 7.6 × 1010 cm-3) and the footpoint (1.1 × 1011 cm-3). The plane-of-sky velocity of the jet is found to be 524 km s-1. The resulting EIS DEM values are in good agreement with those obtained from AIA-XRT. The synthetic spectra contributing to each AIA channel confirms the multi-thermal nature of the AIA channels in both regions. There is no indication of high temperatures, such as emission from Fe XVII (λ254.87) (log T [K] = 6.75) seen in the jet spire. In the case of the jet footpoint, synthetic spectra predict weak contributions from Ca XVII (λ192.85) and Fe XVII (λ254.87). With further investigation, we confirmed emission from the Fe XVIII (93.932 Å) line in the AIA 94 Å channel in the region of the footpoint. We also found good agreement between the estimated and predicted Fe XVIII count rates. A study of the temporal evolution of the jet footpoint and the presence of high-temperature emission from the Fe XVIII (λ93.932) (log T [K] = 6.85) line leads us to conclude that the hot component in the jet footpoint was present initially and that the jet had cooled down by the time EIS observed it.

Two movies attached to Fig. 2 are available at http://www.aanda.org 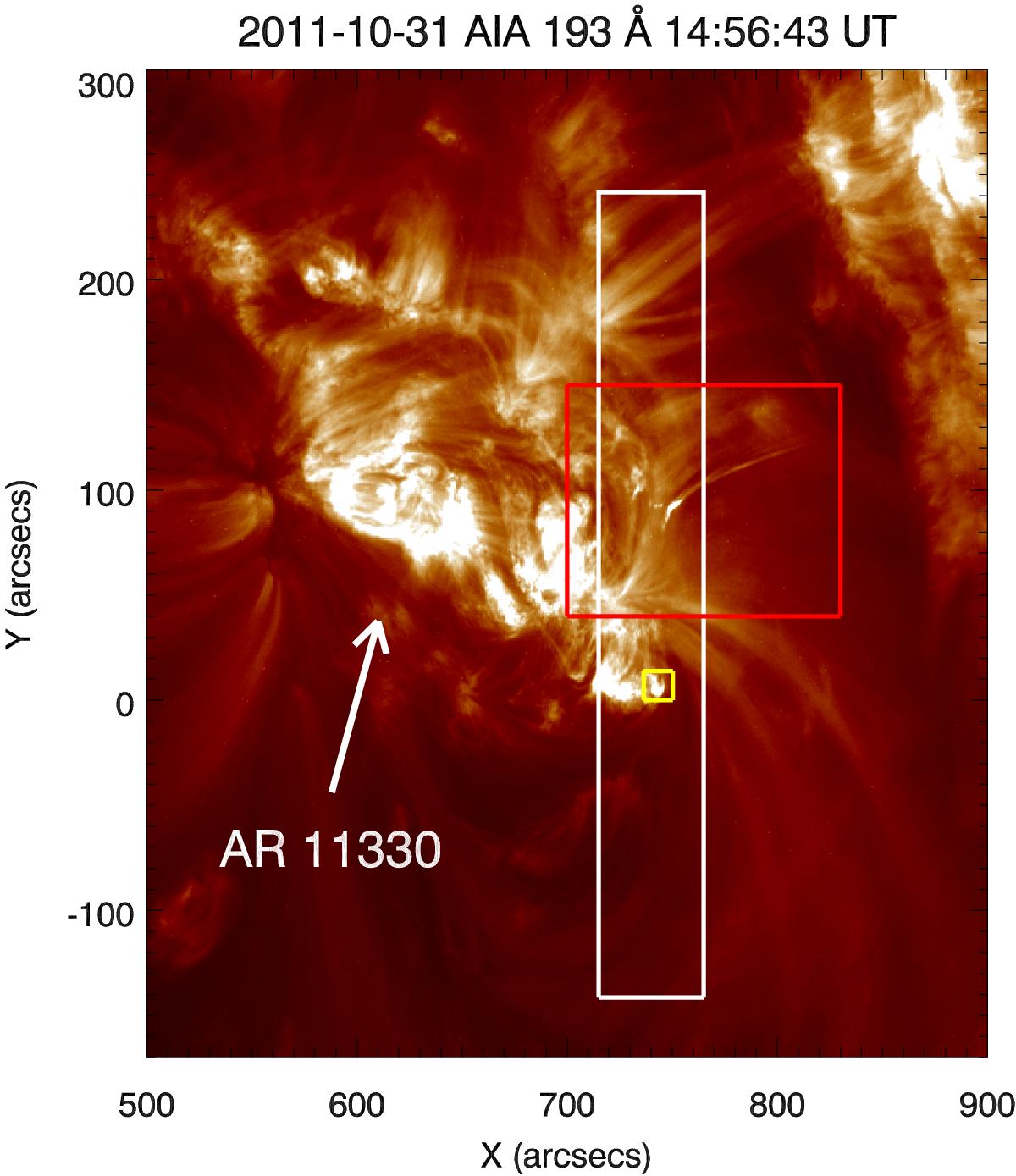