A known feature of electrically charged Reissner-Nordström-anti-de Sitter planar black holes is that they can become unstable when considered as solutions of Einstein--Yang-Mills theory. The mechanism for this is that the linearized Yang-Mills equations in the background of the Reissner-Nordström (RN) black holes possess a normalizable zero mode, resulting in non-Abelian (nA) magnetic clouds near the horizon. In this work we show that the same pattern may occur also for asymptotically flat RN black holes. Different from the anti-de Sitter case, in the Minkowskian background the prerequisite for the existence of the nA clouds is $i)$ a large enough gauge group and $ii)$ the presence of some extra interaction terms in the matter Lagrangian. To illustrate this mechanism we present two specific examples, one in four and the other in five dimensional asymptotically flat spacetime. In the first case, we augment the usual $SU(3)$ Yang-Mills Lagrangian with higher order (quartic) curvature term, while for the second one we add the Chern-Simons density to the $SO(6)$ Yang-Mills system. In both cases, an Abelian gauge symmetry is spontaneously broken near a RN black hole horizon with the appearance of a condensate of nA gauge fields. In addition to these two examples, we review the corresponding picture for anti-de Sitter black holes. All these solutions are studied both analytically and numerically, existence proofs being provided for nA clouds in the background of RN black holes. The proofs use shooting techniques which are suggested by and in turn offer insights for our numerical methods. They indicate that, for a black hole of given mass, appropriate electric charge values are required to ensure the existence of solutions interpolating desired boundary behavior at the horizons and spatial infinity. 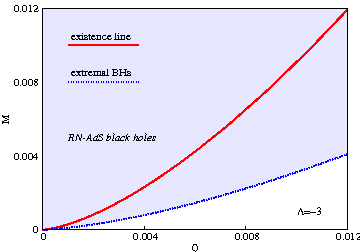