The nature of quasi-periodic pulsations (QPP) in solar flares is poorly constrained, and critically the general prevalence of such signals in solar flares is unknown. Therefore, we perform a large-scale search for evidence of signals consistent with QPP in solar flares, focusing on the 1-300 s timescale. We analyze 675 M- and X-class flares observed by the Geostationary Operational Environmental Satellite (GOES) series in 1-8 Å soft X-rays between 2011 February 1 and 2015 December 31. Additionally, over the same era we analyze Fermi/Gamma-ray Burst Monitor (GBM) 15-25 keV X-ray data for each of these flares associated with a Fermi/GBM solar flare trigger, a total of 261 events. Using a model comparison method, we determine whether there is evidence for a substantial enhancement in the Fourier power spectrum that may be consistent with a QPP signature, based on three tested models; a power-law plus a constant, a broken power-law plus constant, and a power-law-plus-constant with an additional QPP signature component. From this, we determine that ∼30% of GOES events and ∼8% of Fermi/GBM events show strong signatures consistent with classical interpretations of QPP. For the remaining events either two or more tested models cannot be strongly distinguished from each other, or the events are well-described by single power-law or broken power-law Fourier power spectra. For both instruments, a preferred characteristic timescale of ∼5-30 s was found in the QPP-like events, with no dependence on flare magnitude in either GOES or GBM data. We also show that individual events in the sample show similar characteristic timescales in both GBM and GOES data sets. We discuss the implications of these results for our understanding of solar flares and possible QPP mechanisms. 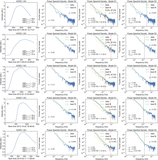