Arcade Implosion Caused by a Filament Eruption in a Flare

Coronal implosions—the convergence motion of plasmas and entrained magnetic field in the corona due to a reduction in magnetic pressure—can help to locate and track sites of magnetic energy release or redistribution during solar flares and eruptions. We report here on the analysis of a well-observed implosion in the form of an arcade contraction associated with a filament eruption, during the C3.5 flare SOL2013-06-19T07:29. A sequence of events including the magnetic flux-rope instability and distortion, followed by a filament eruption and arcade implosion, lead us to conclude that the implosion arises from the transfer of magnetic energy from beneath the arcade as part of the global magnetic instability, rather than due to local magnetic energy dissipation in the flare. The observed net contraction of the imploding loops, which is found also in nonlinear force-free field extrapolations, reflects a permanent reduction of magnetic energy underneath the arcade. This event shows that, in addition to resulting in the expansion or eruption of an overlying field, flux-rope instability can also simultaneously implode an unopened field due to magnetic energy transfer. It demonstrates the “partial opening of the field” scenario, which is one of the ways in 3D to produce a magnetic eruption without violating the Aly-Sturrock hypothesis. In the framework of this observation, we also propose a unification of three main concepts for active region magnetic evolution, namely the metastable eruption model, the implosion conjecture, and the standard “CSHKP” flare model. 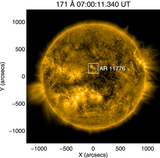