We report on the detection, from observations obtained with the Apache Point Observatory Galactic Evolution Experiment spectroscopic survey, of a metal-poor ([Fe/H] = -1.3 dex) field giant star with an extreme Mg-Al abundance ratio ([Mg/Fe] = -0.31 dex; [Al/Fe] = 1.49 dex). Such low Mg/Al ratios are seen only among the second-generation population of globular clusters (GCs) and are not present among Galactic disk field stars. The light-element abundances of this star, 2M16011638-1201525, suggest that it could have been born in a GC. We explore several origin scenarios, studying the orbit of the star in particular to check the probability of its being kinematically related to known GCs. We performed simple orbital integrations assuming the estimated distance of 2M16011638-1201525 and the available six-dimensional phase-space coordinates of 63 GCs, looking for close encounters in the past with a minimum distance approach within the tidal radius of each cluster. We found a very low probability that 2M16011638-1201525 was ejected from most GCs; however, we note that the best progenitor candidate to host this star is GC ω Centauri (NGC 5139). Our dynamical investigation demonstrates that 2M16011638-1201525 reaches a distance | {Z}\max | \lt 3 {kpc} from the Galactic plane and minimum and maximum approaches to the Galactic center of R min < 0.62 kpc and R max < 7.26 kpc in an eccentric (e ∼ 0.53) and retrograde orbit. Since the extreme chemical anomaly of 2M16011638-1201525 has also been observed in halo field stars, this object could also be considered a halo contaminant, likely to have been ejected into the Milky Way disk from the halo. We conclude that 2M16011638-20152 is also kinematically consistent with the disk but chemically consistent with halo field stars. 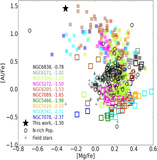