The recent detections of the binary black hole mergers GW150914 and GW151226 have inaugurated the field of gravitational-wave astronomy. For the two main formation channels that have been proposed for these sources, isolated binary evolution in galactic fields and dynamical formation in dense star clusters, the predicted masses and merger rates overlap significantly, complicating any astrophysical claims that rely on measured masses alone. Here, we examine the distribution of spin-orbit misalignments expected for binaries from the field and from dense star clusters. Under standard assumptions for black hole natal kicks, we find that black hole binaries similar to GW150914 could be formed with significant spin-orbit misalignment only through dynamical processes. In particular, these heavy-black hole binaries can only form with a significant spin-orbit anti-alignment in the dynamical channel. Our results suggest that future detections of merging black hole binaries with measurable spins will allow us to identify the main formation channel for these systems. 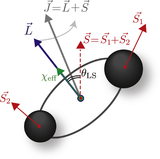