Discovery of a Transient Gamma-Ray Counterpart to FRB 131104

We report our discovery in Swift satellite data of a transient gamma-ray counterpart (3.2σ confidence) to the fast radio burst (FRB) FRB 131104, the first such counterpart to any FRB. The transient has a duration T 90 ≳ 100 s and a fluence S γ ≈ 4 × 10-6 erg cm-2, increasing the energy budget for this event by more than a billion times; at the nominal z ≈ 0.55 redshift implied by its dispersion measure, the burst’s gamma-ray energy output is E γ ≈ 5 × 1051 erg. The observed radio to gamma-ray fluence ratio for FRB 131104 is consistent with a lower limit we derive from Swift observations of another FRB, which is not detected in gamma-rays, and with an upper limit previously derived for the brightest gamma-ray flare from SGR 1806-20, which was not detected in the radio. X-ray, ultraviolet, and optical observations beginning two days after the FRB do not reveal any associated afterglow, supernova, or transient; Swift observations exclude association with the brightest 65% of Swift gamma-ray burst (GRB) X-ray afterglows, while leaving the possibility of an associated supernova at much more than 10% the FRB’s nominal distance, D ≳ 320 Mpc, largely unconstrained. Transient high-luminosity gamma-ray emission arises most naturally in a relativistic outflow or shock breakout, such as, for example, from magnetar flares, GRBs, relativistic supernovae, and some types of galactic nuclear activity. Our discovery thus bolsters the case for an extragalactic origin for some FRBs and suggests that future rapid-response observations might identify long-lived counterparts, resolving the nature of these mysterious phenomena and realizing their promise as probes of cosmology and fundamental physics. 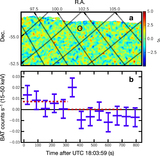