The Dragonfly nearby Galaxies Survey. I. Substantial Variation in the Diffuse Stellar Halos around Spiral Galaxies

Galaxies are thought to grow through accretion; as less massive galaxies are disrupted and merge over time, their debris results in diffuse, clumpy stellar halos enveloping the central galaxy. Here we present a study of the variation in the stellar halos of galaxies, using data from the Dragonfly Nearby Galaxies Survey (DNGS). The survey consists of wide field, deep ({μ }g\gt 31 mag arcsec-2) optical imaging of nearby galaxies using the Dragonfly Telephoto Array. Our sample includes eight spiral galaxies with stellar masses similar to that of the Milky Way, inclinations of 16-19 degrees and distances between 7-18 Mpc. We construct stellar mass surface density profiles from the observed g-band surface brightness in combination with the g - r color as a function of radius, and compute the halo fractions from the excess stellar mass (relative to a disk+bulge fit) beyond 5 half-mass radii. We find a mean halo fraction of 0.009 ± 0.005 and a large rms scatter of {1.01}-0.26+0.9 dex. The peak-to-peak scatter of the halo fraction is a factor of \gt 100—while some galaxies feature strongly structured halos resembling that of M31, three of the eight have halos that are completely undetected in our data. We conclude that spiral galaxies as a class exhibit a rich variety in stellar halo properties, implying that their assembly histories have been highly non-uniform. We find no convincing evidence for an environmental or stellar mass dependence of the halo fraction in the sample. 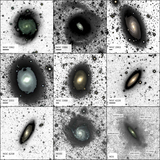