Low-mass white dwarfs (LMWDs) are believed to be exclusive products of binary evolution, as the universe is not old enough to produce them from single stars. Because of the strong tidal forces operating during the binary interaction phase, the remnant systems observed today are expected to have negligible eccentricities. Here, we report on the first unambiguous identification of an LMWD in an eccentric (e = 0.13) orbit around the millisecond pulsar PSR J2234+0511, which directly contradicts this picture. We use our spectra and radio-timing solution (derived elsewhere) to infer the WD temperature ({T}{{eff}}=8600+/- 190 K), and peculiar systemic velocity relative to the local standard of rest (≃ 31 km s-1). We also place model-independent constraints on the WD radius ({R}{{WD}}={0.024}-0.002+0.004 {R}⊙ ) and surface gravity ({log} g={7.11}-0.16+0.08 dex). The WD and kinematic properties are consistent with the expectations for low-mass X-ray binary evolution and disfavor a dynamic three-body formation channel. In the case of the high eccentricity being the result of a spontaneous phase transition, we infer a mass of ∼1.60 M ⊙ for the pulsar progenitor, which is too low for the quark-nova mechanism proposed by Jiang et al., and too high for the scenario of Freire & Tauris, in which a WD collapses into a neutron star via a rotationally delayed accretion-induced collapse. We find that eccentricity pumping via interaction with a circumbinary disk is consistent with our inferred parameters. Finally, we report tentative evidence for pulsations that, if confirmed, would transform the star into an unprecedented laboratory for WD physics. 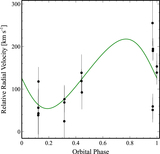