We present Large Binocular Telescope observations of 109 H II regions in NGC 5457 (M101) obtained with the Multi-Object Double Spectrograph. We have robust measurements of one or more temperature-sensitive auroral emission lines for 74 H II regions, permitting the measurement of “direct” gas-phase abundances. Comparing the temperatures derived from the different ionic species, we find: (1) strong correlations of T[N II] with T[S III] and T[O III], consistent with little or no intrinsic scatter; (2) a correlation of T[S III] with T[O III], but with significant intrinsic dispersion; (3) overall agreement between T[N II], T[S II], and T[O II], as expected, but with significant outliers; (4) the correlations of T[N II] with T[S III] and T[O III] match the predictions of photoionization modeling while the correlation of T[S III] with T[O III] is offset from the prediction of photoionization modeling. Based on these observations, which include significantly more observations of lower excitation H II regions, missing in many analyses, we inspect the commonly used ionization correction factors (ICFs) for unobserved ionic species and propose new empirical ICFs for S and Ar. We have discovered an unexpected population of H II regions with a significant offset to low values in Ne/O, which defies explanation. We derive radial gradients in O/H and N/O which agree with previous studies. Our large observational database allows us to examine the dispersion in abundances, and we find intrinsic dispersions of 0.074 ± 0.009 in O/H and 0.095 ± 0.009 in N/O (at a given radius). We stress that this measurement of the intrinsic dispersion comes exclusively from direct abundance measurements of H II regions in NGC 5457. 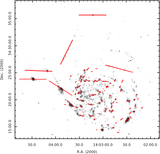