Various small-scale structures abound in the solar atmosphere above active regions, playing an important role in the dynamics and evolution therein. We report on a new class of small-scale transition region structures in active regions, characterized by strong emissions but extremely narrow Si IV line profiles as found in observations taken with the Interface Region Imaging Spectrograph (IRIS). Tentatively named as narrow-line-width UV bursts (NUBs), these structures are located above sunspots and comprise one or multiple compact bright cores at sub-arcsecond scales. We found six NUBs in two data sets (a raster and a sit-and-stare data set). Among these, four events are short-lived with a duration of ̃10 minutes, while two last for more than 36 minutes. All NUBs have Doppler shifts of 15-18 km s-1, while the NUB found in sit-and-stare data possesses an additional component at ̃50 km s-1 found only in the C II and Mg II lines. Given that these events are found to play a role in the local dynamics, it is important to further investigate the physical mechanisms that generate these phenomena and their role in the mass transport in sunspots. 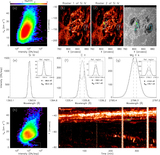