We present radio follow-up observations carried out with the Karl G. Jansky Very Large Array during the first observing run (O1) of the Advanced Laser Interferometer Gravitational-wave Observatory (LIGO). A total of three gravitational-wave triggers were followed-up during the ≈ 4 months of O1, from 2015 September to 2016 January. Two of these triggers, GW150914 and GW151226, are binary black hole (BH) merger events of high significance. A third trigger, G194575, was subsequently declared as an event of no interest (I.e., a false alarm). Our observations targeted selected optical transients identified by the intermediate Palomar Transient Factory in the Advanced LIGO error regions of the three triggers, and a limited region of the gravitational-wave localization area of G194575 not accessible to optical telescopes due to Sun constraints, where a possible high-energy transient was identified. No plausible radio counterparts to GW150914 and GW151226 were found, in agreement with expectations for binary BH mergers. We show that combining optical and radio observations is key to identifying contaminating radio sources that may be found in the follow-up of gravitational-wave triggers, such as emission associated with star formation and active galactic nuclei. We discuss our results in the context of the theoretical predictions for radio counterparts to gravitational-wave transients, and describe our future plans for the radio follow-up of Advanced LIGO (and Virgo) triggers. 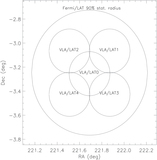