We combine wide and deep galaxy number-count data from the Galaxy And Mass Assembly, COSMOS/G10, Hubble Space Telescope (HST) Early Release Science, HST UVUDF, and various near-, mid-, and far-IR data sets from ESO, Spitzer, and Herschel. The combined data range from the far UV (0.15 μm) to far-IR (500 μm), and in all cases the contribution to the integrated galaxy light (IGL) of successively fainter galaxies converges. Using a simple spline fit, we derive the IGL and the extrapolated IGL in all bands. We argue that undetected low-surface-brightness galaxies and intracluster/group light are modest, and that our extrapolated-IGL measurements are an accurate representation of the extragalactic background light (EBL). Our data agree with most earlier IGL estimates and with direct measurements in the far IR, but disagree strongly with direct estimates in the optical. Close agreement between our results and recent very high-energy experiments (H.E.S.S. and MAGIC) suggests that there may be an additional foreground affecting the direct estimates. The most likely culprit could be the adopted model of zodiacal light. Finally we use a modified version of the two-component model to integrate the EBL and obtain measurements of the cosmic optical background (COB) and cosmic infrared background of {24}-4+4 nW m-2 sr-1 and {26}-5+5 nW m-2 sr-1 respectively (48%:52%). Over the next decade, upcoming space missions such as Euclid and the Wide Field Infrared Space Telescope will have the capacity to reduce the COB error to <1%, at which point comparisons to the very high-energy data could have the potential to provide a direct detection and measurement of the reionization field. 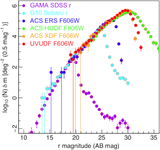