Dicke’s Superradiance in Astrophysics. I. The 21 cm Line

We have applied the concept of superradiance introduced by Dicke in 1954 to astrophysics by extending the corresponding analysis to the magnetic dipole interaction characterizing the atomic hydrogen 21 cm line. Although it is unlikely that superradiance could take place in thermally relaxed regions and that the lack of observational evidence of masers for this transition reduces the probability of detecting superradiance, in situations where the conditions necessary for superradiance are met (close atomic spacing, high velocity coherence, population inversion, and long dephasing timescales compared to those related to coherent behavior), our results suggest that relatively low levels of population inversion over short astronomical length-scales (e.g., as compared to those required for maser amplification) can lead to the cooperative behavior required for superradiance in the interstellar medium. Given the results of our analysis, we expect the observational properties of 21 cm superradiance to be characterized by the emission of high-intensity, spatially compact, burst-like features potentially taking place over short periods ranging from minutes to days. 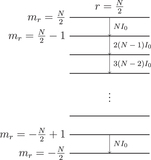