Protoplanetary Disks in the Hostile Environment of Carina

We report the first direct imaging of protoplanetary disks in the star-forming region of Carina, the most distant massive cluster in which disks have been imaged. Using the Atacama Large Millimeter/sub-millimeter Array (ALMA), the disks are observed around two young stellar objects (YSOs) that are embedded inside evaporating gaseous globules and exhibit jet activity. The disks have an average radius of 60 au and total masses of 30 and 50 {M}{Jup}. Given the measured masses, the minimum timescale required for planet formation (∼1-2 Myr) and the average age of the Carina population (∼1-4 Myr), it is plausible that young planets are present or their formation is currently ongoing in these disks. The non-detection of millimeter emission above the 4σ threshold (∼ 7{M}{Jup}) in the core of the massive cluster Trumpler 14, an area containing previously identified proplyd candidates, suggests evidence for rapid photo-evaporative disk destruction in the cluster’s harsh radiation field. This would prevent the formation of giant gas planets in disks located in the cores of Carina’s dense subclusters, whereas the majority of YSO disks in the wider Carina region remain unaffected by external photoevaporation. 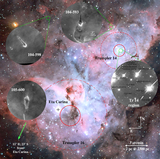