By adopting the empirical constraints related to the estimates of helium enhancement ({{∆ }}Y), the present mass ratio between first and second stellar generations ({M}1{{G}}/{M}2{{G}}), and the actual mass of Galactic globular clusters (M GC), we envisage a possible scenario for the formation of these stellar systems. Our approach allows for the possible loss of stars through evaporation or tidal interactions and different star-formation efficiencies. In our approach, the star-formation efficiency of the first generation (∊ 1G) is the central factor that links the stellar generations because it not only defines both the mass in stars of the first generation and the remaining mass available for further star formation, but it also fixes the amount of matter required to contaminate the second stellar generation. In this way, ∊ 1G is fully defined by the He enhancement between successive generations in a GC. We also show that globular clusters fit well within a ∆Y versus {M}1{{G}}/{M}2{{G}} diagram that indicates three different evolutionary paths. The central one is for clusters that have not lost stars through tidal interactions from either of their stellar generations, and thus their present M GC value is identical to the amount of low-mass stars (M * ≤ 1 M ☉) that resulted from both stellar generations. Other possible evolutions imply either the loss of first-generation stars or the combination of a low star-formation efficiency in the second stellar generation and a loss of stars from the second generation. From these considerations, we derive a lower limit to the mass (M tot) of the individual primordial clouds that gave origin to globular clusters. 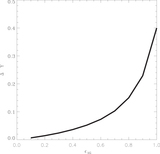