An observation from the Interface Region Imaging Spectrograph reveals coherent oscillations in the loops of an M1.6 flare on 2015 March 12. Both the intensity and Doppler shift of Fe xxi 1354.08 Å show clear oscillations with a period of ∼25 s. Remarkably similar oscillations were also detected in the soft X-ray flux recorded by the Geostationary Operational Environmental Satellites (GOES). With an estimated phase speed of ∼2420 km s-1 and a derived electron density of at least 5.4 × 1010 cm-3, the observed short-period oscillation is most likely the global fast sausage mode of a hot flare loop. We find a phase shift of ∼π/2 (1/4 period) between the Doppler shift oscillation and the intensity/GOES oscillations, which is consistent with a recent forward modeling study of the sausage mode. The observed oscillation requires a density contrast between the flare loop and coronal background of a factor ≥42. The estimated phase speed of the global mode provides a lower limit of the Alfvén speed outside the flare loop. We also find an increase of the oscillation period, which might be caused by the separation of the loop footpoints with time. 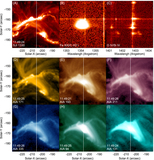