When the sungrazing comet C/2012 S1 (ISON) made its perihelion passage within two solar radii of the Sun’s surface, it was expected to be a bright emitter at extreme ultraviolet (EUV) wavelengths. However, despite solar EUV telescopes repointing to track the orbit of the comet, no emission was detected. This “null result” is interesting in its own right, offering the possibility of placing limits on the size and composition of the nucleus. We explain the lack of detection by considering the properties of the comet and the solar atmosphere that determine the intensity of EUV emission from sungrazing comets. By comparing these properties with those of sungrazing comet C/2011 W3 (Lovejoy), which did emit in the EUV, we conclude that the primary factor resulting in non-detectable EUV emission from C/2012 S1 (ISON) was an insufficiently large nucleus. We conclude that the radius of C/2012 S1 (ISON) was at least a factor of four less than that of C/2011 W3 (Lovejoy). This is consistent with white-light observations in the days before perihelion that suggested the comet was dramatically reducing in size on approach. 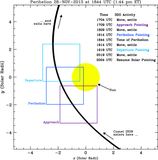