The UV-initiative Hubble Space Telescope Treasury survey of Galactic globular clusters provides a new window into the phenomena that shape the morphological features of the horizontal branch (HB). Using this large and homogeneous catalog of UV and blue photometry, we demonstrate that the HB exhibits discontinuities that are remarkably consistent in color (effective temperature). This consistency is apparent even among some of the most massive clusters hosting multiple distinct sub-populations (such as NGC 2808, ω Cen, and NGC 6715), demonstrating that these phenomena are primarily driven by atmospheric physics that is independent of the underlying population properties. However, inconsistencies arise in the metal-rich clusters NGC 6388 and NGC 6441, where the discontinuity within the blue HB (BHB) distribution shifts ∼1000-2000 K hotter. We demonstrate that this shift is likely due to a large helium enhancement in the BHB stars of these clusters, which in turn affects the surface convection and evolution of such stars. Our survey also increases the number of Galactic globular clusters known to host blue-hook stars (also known as late hot flashers) from 6 to 23 clusters. These clusters are biased toward the bright end of the globular cluster luminosity function, confirming that blue-hook stars tend to form in the most massive clusters with significant self-enrichment.

Based on observations made with the NASA/ESA Hubble Space Telescope, obtained at the Space Telescope Science Institute, which is operated by the Association of Universities for Research in Astronomy, Inc., under NASA contract NAS 5-26555. These observations are associated with program GO-13297. 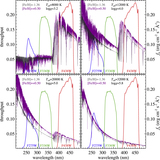